In the summer when was 18 or 19 years old, I met a fella who wanted to buy me a pair of high heels. I remember what he looked like, but sadly not his name. He was tall and good looking with a nice build. He also had dark brown wavy hair that wasn’t a short haircut, but a little longer. When he took me shopping he was nicely dressed in a dress shirt and slacks. Bakers Shoes was my favorite store for shoe shopping at Southridge Mall. I picked out a nice pair of black leather high heel shoes. I remember they were about $35 dollars and I kept the box for quite a while so they would stay nice. Before I can wear them out somewhere, the heels tips need to be replaced since they are worn down to the metal part inside the tips.  Every time I […] 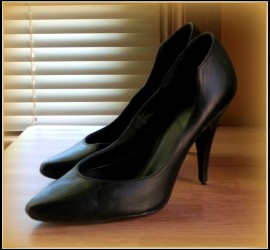 Beauty’s Picture To Me My Love is Not About You   Yesterday Joelle Casteel did a post that spoke about forcing our kink on others and people being accepting of what and who we are. I want to address the issue of public affection and how it’s okay for some people and very much not okay for others. Yes, that is my soapbox you hear being moved into position. So the thing that brought all this firestorm on the internet was the fact that a woman was walking her naked submissive on a leash in public. Folks chimed in from all sectors about the propriety of their actions. Some felt it was okay, but a large majority, myself included, felt that they had no business doing such a thing. The actions definitely fell under the umbrella of forcing their kink on others who did not give consent. Then the subject of […]

Joelle Casteel wrote a really good post yesterday on her blog. It’s titled Who is to judge if I’m non-consensually forcing my kink on others? She makes a lot of good points on multiple subjects in one post. In my post, I am mostly focusing on my ability to show affection to the person that I love in public, without people frowning at me or flipping their shit. We’ve had guys ogle us like the dude in the picture, which is their deal I guess. They’re not going to luck out and get to be in the middle, and go home with us to live out their fantasy in the bed though.   Here is my comment on Joelle’s post on her blog: With Jolynn and I, we don’t even hold hands or kiss when we are out with the general public. I’ve seen people, some being guys, frown at us. […] 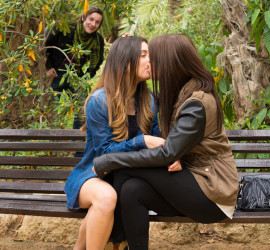