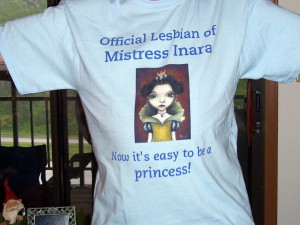 His heavy masochistic ying perfectly complements my sadistic yang. He is the Major Domo at our CFNM parties, he walked my beautiful wife down the aisle to me so we could be married and I could place her collar around her neck for our lifetime, and he and I have so very much fun being ridiculous when we play. He is the one who taught me that not all kinky play is sexual, in fact, he opened my eyes to a few things. He dubbed me ‘The Queen’ which I have to admit I now like, and he is the one person that I honestly feel must share his autobiography with those who will followed in his kinky footsteps.

One final note is that when we play in public, or when people find out how heavy a player he is, their eyes open wide. I am well aware that people wonder why the hell I am beating grandpa. The answer is obvious if they stick around to watch. Grandpa loves it! We are loud, ridiculous, and the impact is intense. A session with him melts away stress like nothing else. He is not kin by blood, but he is a huge part of my kink family.

So without further ado, I give you my friend Jud/Justine. He has seen and done so many things, and this interview is just the tip of the ice burg. Do not miss this interview.

Jesus – It all started with my stepmother’s lingerie, about 60 years ago!

Well, all there was were the magazines and books I mentioned above, and later on gay leather bars and later still was the emergence of discussion groups, the forerunners of todays munches.

In the very early years I was a voyeur, but quickly realized I was a sub. I never thought of myself as dominant.

Oh, no.  It took many years before I even thought of myself as a masochist.  The word had a negative connotation to me – like a weirdo or something!

I made a couple of movies with Mistress Diamond of Chicago that failed to win an Academy Award, and one with Marquise Marie of Grand Rapids, MI that helped to land her and her husband in jail for “prostitution,” and a US Mail infraction.

You know, that was so long ago – about 1964 – that I don’t remember much except her name was Catherine, she lived in Philadelphia, and she called herself a “disciplinarian.”  We had two sessions, and I received a total of one (!) swat with her belt.  Now in what I like to call modern time, my first Mistress was Michelle Peters while she was still in Detroit.  That was a real session with handcuffs, bondage, and real whips!  OMG what a revelation!

Mistress Diamond would have to be number one.  I was collared to her for 11 years, and most of what I know I learned from her, from protocol to experiencing long sessions, to just getting along with a sometimes house full of kinksters.  Other influences were my good friend Steve who was my first real kinky friend, and all of the dommes I have visited over the years.  My long-time association with the Chicagoland Discussion Group, and the South East Wisconsin Discussion Group taught me a lot in the way of how to and how not to, and again, protocol, and was the catalyst for my meeting many, many friends before there was a FetLife!

I can pretty much tell when it is OK to clown around and have fun and when it is best to have my enjoyment with sealed lips!  Recently I was at an out of town play party where I knew a total of two people, and I was quite subdued except for a “woo hoo” or two!!

Don’t get me started on this!  It is a pet, and my main, peeve.  I think that today there are far too many young people who just play around in our scene.  It seems as though BDSM is just a bit of foreplay for them.  I mean, after all, in the “old days” I never, ever saw a dungeon with a built in fuck place.  Never!  Ever!  And so many guys are “poly” nowadays.  I guess I am just too old fashioned.  To me there’s quite a difference between playing with several women over the course of time, and having a bevy of them living with you in a romantic/service situation.

In a big event there may be only a couple of heavy scenes, or scenes where more than one thing was being done to the bottom, or submissive.  I have a reputation of enjoying impact play.  As a result I haven’t had nipple clips but once or twice in ages.  Or a cock whipping.  Same deal.  The exception is the rare times I see a pro Domme.  Then I get the complete package!

Mistress Diamond always separated “church and state” and I try to follow that concept as much as I can.  I know many young people who have no problem broadcasting their kink, but I think that at least at the present time that could come back and bite them in the ass.  In my vanilla world I have one friend who has ideas about my kink, but I try not to mention it, and steer him away if he should bring it up.  I once mentioned cross dressing to my sisters (separately) and both were quite negative.  In my professional life I am sure there was some kink, but it was not mentioned.  Friends at church?  Hah!

I think it will take a lot longer for our lifestyle to be accepted than the gay, bi, or even trans communities.  I think it’s going to be very hard for people to distinguish between consenting play and a downright psycho who keeps and tortures (for real) women or children.

Hey – I figure I owe it to my adoring public!  Seriously, as long as I am enjoying it, down they will keep coming.

Justine began long ago when my stepmother starting washing out her girdles, bras, and nylons and hung them over the shower curtain rod.  They fascinated and turned me on from the age of about 13.  My first foray into cross dressing was buying and wearing a panty girdle.  Then an open bottom one.  Bras came later, and nylons.  After my first failed marriage in the early 60s I collected some articles, and wore them purely for sexual pleasure.  Slowly….very slowly….. I started wearing panty girdles to work.  Then I believe a Mistress dressed me up, and that did it.  Now I fully cross dressed, and eventually added makeup and nail polish.  In the mid 70s Queen Adrena (a pro domme at the time, later a pro wrestler) came to Milwaukee and we had a session.  I picked her up at the airport and we went to dinner, then back to my apartment for a session.  She asked me for my femme name, and I had none, so she said since you like pain so much you will be Justine, named after the de Sade character of the same name who was a bit of a masochist herself.  The name stuck, and here we are!

Today I rarely fully dress any more, as it just doesn’t hold the same thrill for me.  But do not try to take away my panties!  And I like a nightgown for bed.

What an awesome country!  And awesome people!  And the Records Party was icing on the cake!  I have been fortunate enough to have visited all of Australia’s capital cities, and all seven states and territories.  I suppose combining all my time there, it has been at least a year.  I met Bootlicker in 1997 and we have become extremely close over the years, having visited back and forth frequently.  He got me started meeting people and seeing places, and after a bit I was meeting the nicest people on my own!

The Records Party was started about 7 or 8 years ago by Sir Crowd and his submissive missy at their home on the Gold Coast, an area east of Brisbane, pretty much on the South Pacific Ocean shore.  At the party, anyone wishing to set a “record” could do so.  There were all kinds of records:  muff diving, whipping, needles, flogging, golden showers, weight lifting (with the scrotum) and many others.  I wanted to set the “most cane strokes in ten minutes” record, and did so. 800 of them!  In subsequent years I established a strapping record: 1001 (anyone could do 1000!) and paddling (1510) and triathlon of pain which was a total of 2012 with cane, strap and paddle combined.  I broke 3 canes on that one, and strained the arm of a master friend!

I hope to return to Australia one day before too long, to see so many great kinksters again.

The Special Toys
{Jud’s special beating toys at our house.}

One thought on “Guest Post ~ Secrets of My Loyal Lesbian”