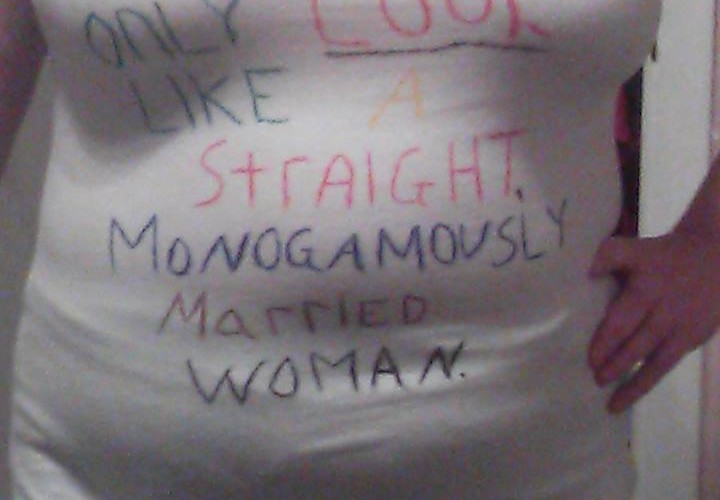 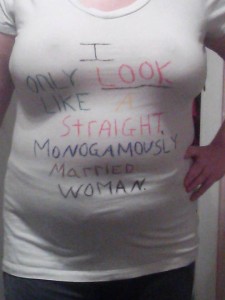 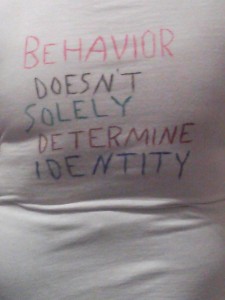 I came out as bisexual when I was 15. It made sense to me. I enjoyed sex with men and I adored whatever intimacy I could enjoy with other women. Now this was 21 years ago, before I spent time in study about transgender and intersexed people, about lifestyle submission, about gender itself, just to name a few. I also became an active Unitarian Universalist (my religion) in there; they are one of the religions that make an active effort to be welcoming of non-heterosexuals. There’s still a long way to go in being welcoming, especially for those who aren’t L or G or add multiple sexual minorities as I do. But then simple labels don’t work for me; even the threefold sexual identity doesn’t adequately explain my identity- yes, I’m used to educating, answering very personal questions, after I define my sexual/relationship reality. It was UU that finally gave me the language of “queer” as an identity that was more encompassing of my reality.

I live my orientation in two ways- what it seems people see based on how they treat me and what I know to be my truth. I don’t wear a wedding ring even though I’m legally married to my Master; I wear the stainless steel collar He put around my throat when He was able to acquire it. When it comes to anniversaries, I think on January 2001 (when our poly triad with my ex-husband ended), not “March whatever 5 or 6 years ago” (that date is written on our marriage papers and in my mother’s date book), when we were able to get married. I think if Shaman (my Master’s nickname) had The Queen’s riches that He would have found another way to protect myself and my son than using the benefits built into heterosexual marriage.

Talking about that 1st way, what people interpret from what they see, occupies a large portion of my thinking, writing, and talking time. When I kiss Shaman in public, do people perceive it to be the act of a heterosexual? I certainly don’t feel heterosexual, whatever feeling that even means. It matters and it doesn’t. While I’m ambivalent about the feminist notion of “privilege,” I have seen some ways it can work. Being able legally to marry Shaman has allowed for insurance in certain employment situations for me, has eased taxes, estate planning etc. Socially, when asked if I want a store’s credit card, I can say “my husband and I discuss such things before making decisions,” and most people don’t question it.

Of course there are the places where the legal relationship does not help me. In church services, where others will happily talk about husbands/wives/partners etc, I sit with “I don’t want to call Shaman my husband; I want to call Him, my Master, maybe my dominant at best, but that’s likely to make people uncomfortable.” Remember that I said even as a UU, parts of my sexual minority status make me an outsider. A piece of irony- the last bricks & mortar UU church I attended, I was only “out” as a lifestyle submissive to 10% of people, that most commonly cited statistic about LGBT people. I know attend an online UU church and the percentage to whom I’m “out” is even less than 10%.

Shaman likes to joke that I’m a lesbian except for Him. When He says that, He’s talking about the fullness of my sexual interests, desires, experiences, fantasies, behaviors. That “fullness” is an important thing. If *you* only look at the fact that it’s been years since I’ve had intercourse with anyone but Him, the fact that I’ve engaged in some form of sexuality with over 100 male-identified people, whereas the number for female-identified people hovers only around a dozen, my sexuality looks quite the opposite of the reality which His joke recognizes. He tries very hard, in the context of our BDSM relationship, to allow me chances to engage with women. He has not done the reading on gender that I have and thinks from the gender binary that I question now. I probably over-make up for His disinterest in thought 😀  As I write this, I’m spiraling between it, an article on intersectionality, and Pat Califia’s “Public Sex” (second edition). And I have my statement shirts. Never want someone to think I’m straight and monogamous if I can help corrupt their assumptions. Consider the pictures of the homemade shirt I’ve shared. I’m inviting conversations, questions whenever I wear this shirt. I want to disrupt what looks like (to some others) a straight, monogamous life because that isn’t my lived reality.

My daily life might not speak to the truth of my identity as a queer woman always. Right now, my Master is limited by a torn Achilles tendon and a blood clot. What might otherwise feel like service more often than feelings like care giving. He can’t easily walk to the kitchen and get Himself food if He’s hungry; I have to be extra attentive to when He eats. He might end up nauseous if the balance of food and medicines isn’t maintained. Going to a store is complicated; even with His fracture cast and cane, He moves slowly and He is too much bigger than me for me to be off any help. So where we’d have amusement of strangers thinking He’s my dad (we have an age difference, but not that much :D), now I’m not sure what it even looks like.

Then there’s my inner world. Tomorrow on my blog, I’ll be engaging in fantasy, and with a woman. You see, between medicines, pain, messed up sleep schedules from medicines, I often go to bed by myself. It’s lonely in that big bed all by myself. So I’ve started inviting my characters (mainly from Vala’s Story) into bed with me. More often than not, it’s the women. That was weird making love with Vala, experiencing the ways in which she isn’t me. Then Iona, Vala’s beautiful domme. My dream domme, that’s Iona. The female dominant that I never met, part of why my dominant is a male-identified person, instead of the woman I once wished for. I think this inner world is one of the most difficult for me. As a writer, just as the person I am, I don’t keep most of this inner world secret, private. In a way, I’ve taken the feminist phrase “the personal is political” to heart, even as I’ve repeatedly felt unwelcome in most “feminist spaces” over my life because of various parts of my identity, BDSM being one of them, sure, but not the only.

What does all of what I just said really mean? My identity is complex, too complex for any reductionist notion of “a female submissive involved with a dominant man.” And I prefer it that way.

You can also buy her books for something to read this weekend.

Out of the Night: Book One (Vala’s Story) print editionavailable at Lulu.com’s Market Placeoravailable on Amazon.comOut of the Night: Book One (Vala’s Story) ebookThe friend succeeded with picture formatting so now you’re just waiting on me to get the ebooks on Amazon and Barnes & Noble. I’m still so gratetful for KISS Ebook Formattingby Elijana Kindel- the only thing it didn’t help with was a tricky html code issue that I needed specific help on.
Out of the Night: Book One (Vala’s Story)- Smashwords- multiple formats- https://www.smashwords.com/books/view/417778 . First 20% available as a free sample.Out of the Night: Book One (Vala’s Story)- MyAwesomeFans.com. Mobi and ePub.http://fanstore.myawesomefans.com/index.php?option=com_virtuemart&view=productdetails&virtuemart_product_id=54&virtuemart_category_id=116&Itemid=263Gates of the Garden: Book Two (Vala’s Story). My editor finished with this book. I’ve done my work and beta readers have enjoyed it. After professional formatting on “Night,” it’ll be “Gates”‘s turn. Thankfully the cover art is done- did you catch the reveal! Again I will offer print, Nook, and Kindle editions.Joelle’s Chaotic Collection of Screwing. I decided I wanted to give my readers this collection of short stories, story excerpts, and even an erotic poem for free. After much searching, I found I can use Google Docs to allow readers to download the book for free. Please remember, even though it’s free, I do hold the copyright and I ask that if you know someone that would enjoy the book, ask them to download the book for themselves. However the Google Docs wasn’t a perfect fit and I ended up engaging a friend to format it- with his help hopefully Vala’s Story will start coming out faster. Now you have the option to download (and review please) the book at Smashwords.