This post should have the above title, but it should also have an added bit called The Truth About Gerome T. Gnome. Yes, the truth about our gnome better known as Gerome_the_Gnome on Fetlife has finally come out. Be prepared for some seriousness and some silliness, as I spill on the truth about Gerome, our gnome. You can see his Fetlife profile if you click above.

Many thanks to Jon Pressick, both for doing the interview, and giving the okay to repost it here. Take time to check out his blog Sex in Words. He’s a well known sex blogger who has interesting articles and interviews on his site.

Below is my interview with Jon.

1. How did you get into sex blogging?

2. Your love of history is clear in your works. Do you have a favorite particular time period?

It would probably be easier to tell you what doesn’t turn me on rather than what period does. Anything after 1900 doesn’t really do it for me. Once you pass that point, the wars, machines, technology, and way of life changes too much for my liking. My books are dark, and my heroines usually trapped because of the way women were treated throughout history, which is odd because I am a dominant in everyday life. I also prefer Europe for the setting, probably because it is so much older. History was dark, bloody, raw, and cruel. Men were more evil than the most evil character I can create. I guess that allows me to justify my characters behavior. That was just the way it was. History lends itself perfectly to my dark style of writing.

When I was maybe 13 my friends and I found this book called Candy’s Summer of Pain. I have no recollection of how we found it, but I do recall reading it and being very turned on by poor Candy’s adventures. That was my introduction into kink. When I look back now over my heterosexual relationships, I can see how I really was the dominant one. I tried to get my boyfriends or husband to spank me and love rough sex, but never once was able to provoke them into going from wild sex to spanking. I now think it was because I instinctively chose men who despite their very macho exterior, had submissive tendencies.

After my divorce I went on a quest online to find a dominant. I had masochistic tendencies and wanted to be spanked and fucked hard, and was unaware you could be a dominant who enjoyed a bit of pain. My quest went badly. I was a horrid submissive and nothing worked out. Through my writing I met a woman who was to become my first submissive. We were all lusty with each other but both thought we were submissive. Finally we decided we each had to try our hand at dominance and topping. Well when I took my turn it was a revelation. I loved it and was good at it and it felt so very right, and so the dominant, sadistic mistress was born.

I have long since realized that I am not really a masochist. I will bottom for electric play, but that’s it. I never looked back once I discovered myself over 10 years ago. The shoe fit and I wear it well. All of my D/s relationships were long term leading up to my meeting with my wife. I’m a loving but strict mistress who has found my perfect partner. She has topping tendencies, and is submissive to only me. I have two service submissives and a regular play partner, as well as teaching people about impact or electrical play. I can honestly say I’m living the best years of my life.

Wow, now you know why my books are long. I ramble.

5. Are there subjects too dark for you, that you won’t write about?

I would say there are taboo things I won’t write about, not things too dark. I am a rape survivor and whether it’s cathartic or for some other reason, rape rears its ugly head in many of my books. It normally takes on the whole nonconsensual consent aspect which my experience wasn’t. I think perhaps that’s why I write in time periods where forced sex was just the way of things.

There is talk of past incest between my male lead vampire character and his vampire sister in the Beneath the Shadows of Evil Trilogy, and both characters are sufficiently evil and twisted. I don’t go into much detail, but really, vampires have no morals or a soul. My vampires don’t sparkle. They are evil, blood thirsty, immoral, sadistic creatures. I also struggle with the heroine’s age in many of my books because in the past 18 was really old to not be already married. I work around it though. The subject of kids being involved in any type of sexual relationship is very taboo, and the whole animal thing is way too taboo.

6. What advice do you have for writers hoping to self-publish kinky works on Amazon?

Don’t go overboard on the kink, especially if you don’t have any experience with it. Stay away from any topic that might be construed as involving children. I think that anything that involves aspects of Littles will be seen as a reason to be banned as well. Vanilla people don’t understand that Littles and relationships with Littles doesn’t mean either partner wants to have sex with children. Hell, many kinksters don’t get the whole Little thing. No way in hell will you convince the Amazon folks that it’s okay.

Don’t portray us as broken. We aren’t broken. While it’s true my male leads often need reforming for one reason or another, they are not broken.

If you’re going to write a book, make it a book. Otherwise take your 30 page story and save it for a collection of short stories. I’ d say a book is at the very least 90 pages and that is pushing it.

7. Just who is Gerome the Gnome?

Ah… Gerome. He’s our lovable and kinky gnome. No, we don’t do kinky things with him, he just lives with us. We are his owners, though now he has a Gnome Mistress named Mean, Mean, Geraldine. While shopping at a craft store for wedding supplies, I spotted Gerome on the sale rack. We’d wanted a gnome but they were pretty expensive so we hadn’t bought one, and then we found Gerome and the rest is history. His brother is the Travelocity Gnome, who likes to rub his success in Gerome’s face. His parents have disowned him as the black sheep of the family. We love him and he will always have a home here. 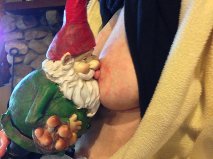 He has his own Fetlife page, loves boobies, has more friends that I do on Fet, and loves going to kink events of all kinds. His Fet name is Gerome_the_Gnome, and his first event was at a kinky picnic that we went to about a week before our collaring and wedding ceremony. We found that Gerome is a photo whore and loves to nestle in ample cleavage. His adventures began that day, and we caught it all on film. Even his unknowing float on the Jello wrestling pool before all hell broke loose in it. 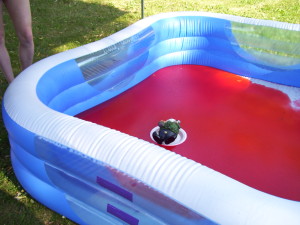 While doing my best to relax a day before our wedding in the cabin we rented for the event, I decided to make a profile on Fetlife for him. The greeting he received from the Fetlife greeter is priceless:

Heard a rumor that our lil online kink community just got bigger, and it’s true because here you are! Let me be the first to introduce myself. My name is ***, and I am one of FetLife’s official Greeters. We are here, to not only personally welcome you to the FetLife family, but to show you around, and answer any questions you might have.

The first thing that people usually do is work on their profile. If you click on your name in the top right corner, you will see all the links you need to make your profile kinkalicious, links to upload your pictures, your videos, edit your profile etc.

There is more but this part let me know right off that Gerome was going to be a big hit. His antics are known far and wide. Seriously, people friend Gerome all the time.

Feel free to friend him if you have a Fetlife account. If not, browsing his pictures will give you more than a few laughs as will his profile.

Here is a classic picture of Gerome at our camping event we go to every year. Beauty and I went to take a nap and when we returned, Gerome was saran wrapped to the St. Andrew’s Cross. Typical Gerome! 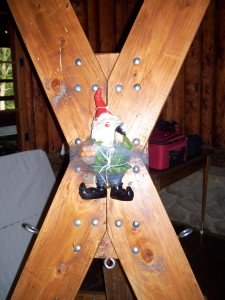 Gerome met his Domme Mean Mean Geraldine at the same event two years later while at kinky camp last August. One of our friends introduced them, and she hasn’t let him come up for air since. Here is a link to his profile. Gerome and Geraldine now reside on a pedestal in our dungeon though we at times find them using the equipment. They are very happy. 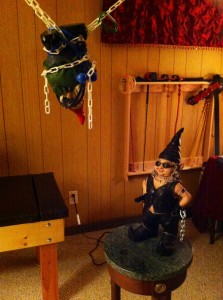 Now back to the interview. What can I say? Jon asked. The truth about Gerome had to come out sooner or later since I mention him in my author bio.

8. What three, unique words do you think you use the most in your stories?

This is a hard one. I try to use words that fit the time period, and my paranormal historical trilogy has Gypsy words in it. I can’t really put my finger on three words. I love the Thesaurus. I use a good amount of terms for anger, pain, and such since my books are dark and there’s suffering, and I use a good amount of terms for the female anatomy. You have to mix up the words for clit and vagina, and for a woman being wet. I’ve read some crazy terms for that!

9. What can we look forward to from you in the future?

A non-fiction book on planning and hosting CFNM (Clothed Female Nude Male) parties. My wife wants to call it “Planning a CFNM: A Girl’s Guide to a Naked Lunch”. We have the CFNM parties once in a while in our home. They are formal and it takes a huge amount of prep, but now the guys are trained and we have everything down to a science. We have an elegant meal, games that are just crazy, foot rubs, and play in the dungeon if anyone wants. They are very private and each woman gets her own male servant for the parties so the service is impeccable.

Like most kink activities, there are a lot of misconceptions both with the vanilla folks and the guys who want to be a server at a CFNM. I like to educate and one does need help in planning.

I’m also working on a new kinky historical novel set in England during Victorian times. It’s called “His Lordship’s Wayward Wife”. It will be out this summer.