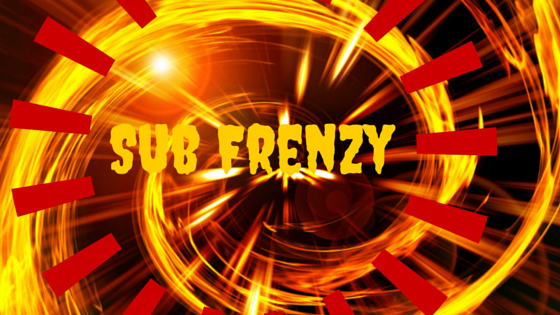 What Is Sub Frenzy, and Am I In Danger of Having It?

When I started this post, it was with the intent to identify, explain, and inform people about a thing called sub frenzy. I accomplished what I intended, but as I often do, I expanded on my original idea. I tend to ramble, and in this case this post transformed into something that can be used as a guideline not only to those in danger of being in the grips of sub frenzy, but for submissives who are seeking an ethical dominant who really has their best interest at heart.

Many, if not every submissive has experienced sub frenzy even if they don’t know what it’s called. Basically, sub-frenzy is the overwhelming need to experience submission. As a submissive, you will do anything to become someone’s submissive or feel that glorious feeling of being owned or under control, no matter how stupid and reckless the situation or un-safe the environment. The craving to belong and to experience the often times new found desire to be a part of a BDSM relationship overrides common sense. You ignore the red flags that normally would make you back away from a person or situation. It can happen to anyone, even someone who is normally very smart and socially savvy.

Every submissive, from the inexperienced newbie to long time submissives who may have found themselves recently released from their dominant can be prone to sub frenzy. It is an extremely powerful phenomenon and one that is hard to see yourself in and even harder to ignore. I have seen sub frenzy happen in almost every friend who is new as well as those subs who find themselves set adrift after a long term power exchange relationship. The craving to belong to someone is just that powerful, and in submissives who have been released, the feeling of not being able to function without a dominant’s control makes them seek and need a new dominant asap. My wife had sub frenzy when she first became active in BDSM. It’s like a kid set loose in a candy store. You want, want, want, and you want it NOW. She made some not so good choices and agreed to things that she will now say no to. It’s not because she has learned what she likes and doesn’t like, it’s because she is no longer in a state of desperate need to be a submissive. Once the sub frenzy was gone, she made clear headed decisions and didn’t feel compelled to agree to things she would never do.

Subs who are in sub frenzy just don’t see it. They do not realize they are experiencing sub frenzy. This makes them very vulnerable, and there are those dominants who will take advantage of someone in this state. The role of a protector has gotten a bad rap because of dominants who prey on newbies or unstable submissives, but a person who really protects in an honorable way (no sex expected!!!) can be very valuable in giving their support and helping to guide the submissive into making better and safer choices.

What are the signs or symptoms of sub-frenzy?

The things listed are a good idea for any submissive seeking to find a dominant, but the guidelines are especially important for those in a vulnerable situation. You need to get to know yourself first. Go, watch, explore with someone who is safe and respected. Do not allow yourself to be cut off from your friends. Do not accept someone who won’t tell you about yourself. Become comfortable with negotiation and asking personal questions. It’s your body and your mind, and even if you want to give yourself completely to a dominant, your body and mind should remain yours until you get to know the dominant well. Remember the one night stand you had where you really regretted it in the morning? A BDSM scene gone wrong, or one that went beyond your consent is much worse. Your heart, mind, and body are given, and there are dominants who take what you give without any regard to you as a person.

A dominant/submissive relationship is a two-way street where both parties get their needs met. It isn’t all about the dominant, BUT you have a responsibility to keep yourself safe and get your needs met. You, yes you! Only you can allow yourself to be taken advantage of. Only you can allow yourself to be preyed upon. There are ways to prevent your vulnerability from turning into something bad, or to at least safeguard yourself from physical and mental non-consensual acts. If you are new or suddenly find yourself set adrift from your dominant, allow those who really have your best interest at heart and who want nothing from you to help you make good choices. Ultimately it is your job to keep yourself from being taken advantage of. Yes, unsafe and unethical dominants can and do take advantage of subs in many ways. These dominants shouldn’t be protected by the community, and their unsafe actions should be made known, but in the end, you must take responsibility for your own protection.

10 thoughts on “What is Sub Frenzy and Am I in Danger of Having it?”