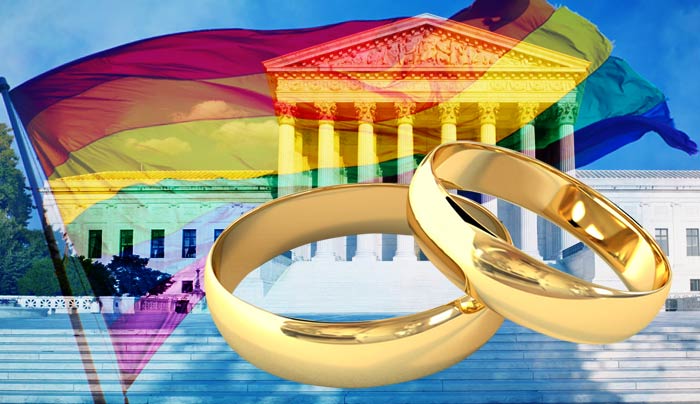 SCOTUS According to Jack

So marriage equality is finally here, by order of the SCOTUS. I for one am extremely thrilled while still being mindful of the fact that there is still work to do in the various spheres of human rights. But it is a huge victory for US citizens that there is now formal acknowledgement and legitimacy of same sex marriage. The ruling does not particularly affect me on an individual level. I’m already married. Marriage Equality was recognized in my state last year and prior to the ruling, Marriage Equality existed in some form or another in 37 states prior to the ruling. It does affect many of my friends and loved ones, however, some of whom have been with their partners for decades, but have been unable to so much as visit them in the hospital when they are ill.

I spend a lot of time and maintain a large presence online. And my travels around the net have taken me a lot of places, and I’ve seen a lot of varying responses to the SCOTUS decision. It was inevitable that I would come across some dissent, be it on Fet or on Facebook or any of the other sites I’m on. There are of course the standard bigots wailing and gnashing their teeth because they think that gay people getting married to each other means somehow that they will be forced to marry a gay person (seriously, these people exist. And it’s sad) or that “something” will happen that invalidates their marriage or makes it mean less. Or that same sex couples shouldn’t be allowed to marry because they can’t make babies together and the entire point of getting married in their eyes is baby makin’ (apparently infertile heterosexual couples or those that do not desire to have children do not exist in their minds). There are also those that think that gay marriages now being federally recognized means that religious officials will now be FORCED to perform ceremonies for same sex couples. For these people, the lovely people over at Cracked.com have put together a very handy, easy to comprehend guide (Which I was very impressed by given that their typical audience tends to be 20 something bros who think the forefront of humor is a lot of dick jokes): http://www.cracked.com/quick-fixes/a-30-second-guide-to-how-gay-marriage-ruling-affects-you/

I have encountered one particular breed of dissenter to the Marriage Equality decision that makes me furrow my brow and scratch my head. The Arm-Chair Lawyer. Generally they claim that they aren’t against gay marriage per-se, some even claim LGBT “ally” status, but that it is some sort of horrible tyranny that the Supreme Court “imposed” this on a federal level and taken the rights away from the voters and the states and that marriage is not under the jurisdiction of federal law  They seem to be protesting too much by wrapping themselves in a cloak of vaguely legal sounding jargon. The only time I can recollect that much whining about “States Rights” (granted, the “states rights” in question was the right to keep slaves) was just before the civil war and that just went so very well for everyone didn’t it?

For starters, nothing is being “imposed” on anyone. Gay people are now no longer excluded from the civil, government recognized institution of marriage and the various benefits such a union provides, and that is all.  Now as someone who was raised Catholic, but is now agnostic and married to an atheist, I have first hand experience with the difference between marriage as a civil matter and marriage as a religious matter. Marriage as a civil matter is what this legislation addresses. The Church that I grew up in would not perform marriages for people who have been divorced because it was against their beliefs, but that certainly didn’t keep divorced people from getting married all together. They could still get a marriage license and have their marriages recognized by the government. No one is going to force churches to perform ceremonies for same sex couples.

Now onto the next. The notion that marriage is not/should not be a matter of “federal law” and that SCOTUS should not be ruling on it in the first place. The thing is, there is precedent for marriage being considered an “inalienable” and, therefore, fundamental right, which makes it a matter that is smack in the middle of the SCOTUS wheel-house. In 1967 Mildred Loving, a black woman, and Richard Loving, a white man were both sentenced to a year in prison for marrying each other because laws in their home state of Virginia prohibited interracial marriage. The case was brought before the Supreme Court, where it was unanimously decided that such a law was in violation of the Equal Protection clause of the 14th Amendment to the US Constitution which reads in part:

Just as Loving vs. VA did not “create” or “impose” the notion of interracial marriage, it simply deemed state imposed restrictions on those marriages to be unconstitutional, Obergefell v. Hodges reached a similar conclusion. Only instead of applying to interracial couples, same sex couples are now the ones allowed to procure a marriage licence and have that marriage recognized as legally valid in all 50 states.

And there we have it, stripped down to nuts and bolts, SCOTUS essentially decided that the 14th Amendment applies to gay people who want to marry each other 40 plus years after it ruled that the same Amendment applies to people of different races who want to marry each other. To be quite frank about it, and I don’t think I’m alone here, it’s about damn time! Sadly though, every day that goes by, it becomes more apparent to me that while we are now moving forward by leaps and bounds, there is still so very much work to do. So while the LGBTQ community and their allies have scored a big feather for their cap, the fight is so very far from over.

One thought on “SCOTUS According to Jack”