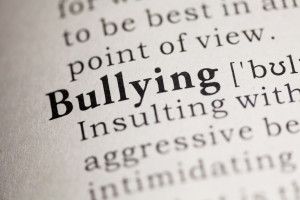 Dictionary definition of the word Bullying.

Do you remember that kid when you were little, the one everyone avoided because if you caught his or her eye it meant impending doom? Maybe you were witness to or experienced first-hand the group of mean girls who thought they were better than everyone else was, and made life hell for the nerdy, shy people. What about the big kid who teases or beats up those weaker day after day, did you know him? Then there is the stereotypical group of jocks who stuff the loner or geek in his locker. I know, that particular act of bullying happens more often than not in the movies instead of real life, but it is an unfortunate reality that bullies exist, and there are a lot of people who can vouch for the cruelties of them.

All of the above are profiles of bullies, but that is just scratching the surface. They work in groups or alone. They hunt their victims, and when they find one, they do everything they can to hurt them. They may work in the open or on the sly, but regardless of the mode of operation, their goal is to do harm, and they don’t stop until their sadistic tendencies are well fed. Whether face to face or on the internet, people who harm those who absolutely have not given consent, are thriving in our society, and news flash, this is not just a kid problem. You do not have to be a young person or a parent of a bullied kid to experience the pain bullies inflict, and therein lies the significance of this post.

In my opinion, people seem to think that those who were mean or who caused terror as kids and teenagers eventually grew up and came to see the errors of their ways. This in far from true. While many bullies may grow a conscience, many do not. They grow older and may become more subtle, but they are still seeking to experience the thrill of hurting another or making someone’s life a living hell. The media has jumped on the bandwagon, of shaming and exposing bullies whose action have caused a young person to commit suicide, but they have yet to dig deeper. We don’t hear about or get a chance to expose adult bullies, and trying to put an end to their actions is much more difficult, partly because no one wants to point fingers at work or be singled out by their boss for trying to get the bully to stop their actions. In fact, often times it is a person’s boss who is the culprit, and trying to stop them may take a formal or legal complaint.

You may still be scratching your head and wondering where I am going with this. Don’t worry, I will tie it all together. I will stand up and say that I, the strong dominant mistress in my kink life was the victim of a bully for three years. Those who know me in the kink community would probably be very surprised to find that out, but it happened, and I am finally crawling out of the dark place that was my toxic work environment. That said, it wasn’t easy. It wasn’t easy, but it should have been. Calling out adults who bully other adults needs to move from the dark corner where some hide because they are scared, and some hide because they feel shame. We have moved from a stance of blaming the victim when it comes to rape, spousal abuse, sexual abuse, and with kids bullying kids. Now we need to take being an adult victim of an adult bully into the light.

This post came about for a number of reasons. My own experience at the hands of my boss gave insight into the problem. Other instances, two of them very recent, have occurred to add fuel to my fire, and have ignited my need to bring out my soapbox. I will say it again, kids who are bullies turn into adults that are bullies.

They work hard to advance their job situation so they may be in position to play in the lives of those under them. One may say that the strong rise to power and that is how it should be, but I beg to differ when power turns to mistreatment. Just like a dominant in the kink world, one must control with intelligence AND empathy. Just because a dominant can hurt, humiliate, oppress, and command their submissive, doing all those things turns into abuse if they don’t have consent. Those in power, be they a parent, co-worker, boss, or even a politician, must oversee other’s lives with compassion because if you remove the empathy and compassion what is left can be cold and calculated. Adults must not seek to climb their way up by stepping on and intentionally hurting others. It can be hard for an ethical person to manage such a climb, but it can be done.

We have been witness to the power of the church, and the secret of priests who abuse being hidden from the public. We hear of hate crimes against those of a particular race, sexual orientation, or religion, and we cannot forget the terrorists who destroyed America’s feeling of safety or the world leaders who used their power to kill millions. These are the bullies and acts of victimization the media has covered. Unfortunately, it is not only those who have been exposed who bully. Not every bully has a spotlight shined on him or her to expose their shame. Some bullies are even supported by those who have drunk their Kool-Aid and lend their support to the one hurting others. Just like in school, the bully has a following.

I have seen a friend outed by a co-worker and lose his job. It left him scrambling for a way to explain to his extended family, and seeking a way to pay the bills and find medical coverage. I have seen parents bully a child into being straight. Even though their actions were fueled with good intentions, it did irreparable harm. I recently heard of a woman who was bullied at her job for 10 years causing her to commit suicide because she couldn’t take it anymore, and yes there was a system in place to stop the harassment, but her safety net failed. My own safety net failed. I filed a formal complaint with the government agency who has an office among the administrators where I work. I exposed myself to reprisal and renewed bullying thinking the office that is to ensure harassment doesn’t take place in my large work system would keep me safe. I was wrong. Their only suggestion was to mediate a conversation with my bully. Four complaints like mine were filed, and yet nothing has happened to my boss/bully. I was able to reach a safe place after years of harassment, but not all are so lucky.

The coup de grace on bullying still taking place well into our adulthood was the article I read yesterday about the superintendent of a school system here in Wisconsin facing the accusations of bullying filed by eight adults who had every day contact with her. I have no idea if she was a bully in school, but I am betting she was. Just like the little kids who pull the wings off flies, inflict cruelty to animals, and then spiral into being abusive adults and sometimes even serial killers, the act of bullying begin when people are young. Some may wise up and see the error of their ways, but others don’t.

So what do we do? How to we face the bully who not only steals lunch money, but can ruin our ability to earn a living? How can we help those who may be suffering in silence because they are afraid? First, we need to speak up. Many bullies are cowardly and will only attack victims who won’t or can’t speak up. Just like the bullies of our childhood, when confronted, they aren’t so powerful. If you are afraid, tell someone who may be in a position to blow the whistle, expose them, or make it harder for the bully to operate. If you can’t speak up for the victims, then offer your shoulder and your support. Misery may need company, and, as they say, two heads are better than one. If there isn’t necessarily safety in numbers, having someone to talk to beats suffering alone.

Find out if there are legal avenues, you can take. Harassment and abuse are against the law. Keep pertinent information or evidence that are in the form of emails or texts. My bully would never communicate in writing because she knew better than to leave a paper trail. That was one reason my accusation may have lost steam. Still, she may have suffered reprisal that I don’t know about. If enough people file suit, people will have to listen, even without evidence or witnesses.

Let the bully know that what they are doing is not okay. My hands were somewhat tied because of her position of power. I had to be careful of what I did and said. She would have jumped on any chance I gave her to write me up for insubordination or misconduct. She was seriously always watching the cameras, and her minions were taking notes. Still, I did what I could. I called people, and wrote people and stood up to her as much as I dared.

The biggest threat to an adult bully is exposure. Unlike childhood, bullies aren’t cool. We know it isn’t okay to pick on people. It isn’t okay to hurt them emotionally. It isn’t okay to make them fearful of losing their job or being outed. It isn’t okay to use power to make others fearful or cause such despair that someone takes their life. It isn’t okay!!! If you are made aware, stand up and say it isn’t okay! Help to move that rock the bullies slither out from under. Help to put an end to their power trip. Tell someone. Alert a lawyer. Alert the media. It’s okay to do so anonymously. Don’t take risks that can backfire, but at the very least let the victim know they aren’t alone.