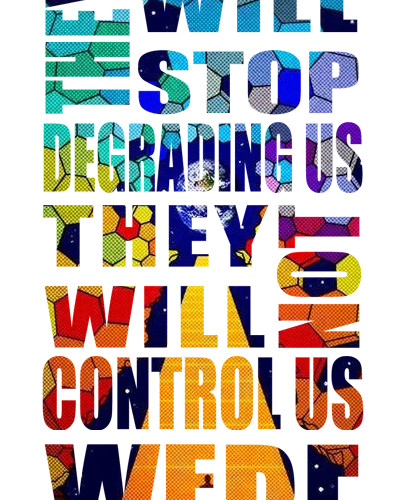 Change Is A Four Letter Word

Change is just a word, but it can mean many different things to people. Some of us hate it, and some embrace it. I am one of the haters. Change does more than annoy me, it gives me anxiety, makes my head spin with the uncertainty of it, and is just plain unwelcome in my life. Perhaps it’s the dominant in me who must always be in control speaking up, or the memories of bad changes in my past keeping me from wanting to move forward. Either way, telling me there must be big changes in my life is a sure way to receive a nasty glare.

I am well aware that there have been and will be great changes that come along. Meeting my soon to be all the way wife, Beauty, snowballed into a wonderful and life altering change, but overall, I am still not a fan. I like constant, embrace stability, feel most calm when there is a feeling of permanence. I have been having a rough time of it at work lately, mostly because the person in charge is someone who firmly believes that one should always be moving, if not up, then at least sideways in one’s career. Newsflash, woman I seriously despise, some of us have found a job that we enjoy and find fulfilling, and have no desire to move about. I’ve worked 28 years in my current position and have only 2 to 3 years left before I will retire. Why should I be forced to change just because you think people should? I am good at what I do. I have loads of experience, my clientele love me, and I love them. Leave me the hell alone! I just get so irritated when people screw with my life. Live life in accordance with your beliefs, but don’t force them on others.

Rant over. Now I will get to the reason for this post. Big or small, love it or hate it, for good or for bad, the only constant in life is change. It comes whether it is welcome or not, and can be as hard to accomplish for those who desire it as it can be to tolerate for those who hate it. Either way, when it comes along, our best bet is to accept it or embrace it and do all we can to work with what life has set upon our doorstep.

As the title of this post states, to me, change is a four letter word, but now I want to talk about those who do battle to bring about change. Some are activists who pave the way for the rest of us, working tirelessly and facing society’s wrath or accolades as they are judged by the media on each of the hundred places people give their opinions now days. They have fought through history to free those who were enslaved and enact changes that declare people of color equal to those who are white. They have battled to give women the right to vote, have equal pay, have an abortion, be given access to birth control, the right not to be viewed as second-class citizens or worse, stoned to death for some minor affront they committed.

Activists for change have stood proudly and declared their love for their same sex partner and have battled those who say their love is wrong, immoral, or depraved, and that marriage between them should never be legal. They have stood among those emaciated by famine, suffering in war ravaged countries, and devastated by disease in order to make the rest of the world see the suffering and do something to help. All of them fighting for the needed change, standing tall, making noise, and doing their battle in the spotlight, regardless of the personal toll their fight may take. It is to these people I give a cheer and offer my voice in support, and it is to the quiet ones who battle society’s scorn much more privately as well. I join hands with them and attempt to smack society upside the head if only with my words because they are worthy of much more than my accolades.

Those familiar with my blog know I am out spoken. They may also know that I must hide who I am because of the toll it would take on my ability to carry out my job. I know there are those that would say “They can’t do that! You can’t be fired for being a lesbian.” They are right, but it can make my workplace a living hell. That makes me even prouder of those who openly decide to change their gender, or at least live as the opposite sex from which they were born despite the pain their decision brings. I guess living as a man when you know you are a woman or vice versa is even more agonizing. Regardless of their stance, their actions take guts. They show the trait of bravery, and an unbreakable will to be who they must be. To them, I give the biggest verbal standing ovation because I could never be that brave.

Through life, I have come to know those who hide from the world, knowing the scorn of their families and vanilla friends would be too much to endure. They slip on their feminine or masculine persona behind closed doors, denying the world and themselves the one they long to be. Yes, I still remember you Whisper, and to you and those like you I offer a heart full of understanding. I know friends who openly dress as women, sometimes always and sometimes when they wish, and to them I give kudos to their soft woman side and the courage it takes to go out in to society. I know those who have made the transformation in every sense of the word. The male or female that resided inside is free and has emerged from the shadows cast by society’s shaming. To them, I give a golden medal for iron-clad guts, and the nerve to say fuck you to those who felt it was their business and had something ignorant to say.

It is for this reason that I must give accolades to Caitlyn Jenner and to Vanity Fair for the cover of the gorgeous woman who emerged from her male chrysalis. I love that it shoved Caitlyn’s beauty down the throats of those who thought her choice and her change disgusting. I also love that the naysayers who have made ridiculous statements or requests such as the rescinding of Olympic gold are being scoffed at. Shame upon those who have dared to be bigoted, scornful, or attempted to make a mockery out of her very public battle with a very personal choice.

To Caitlyn Jenner and those like her. To the parents brave enough to allow their little kid to be the person they were born as despite what is between the legs. To those who have continued to love and support anyone who does not or cannot accept the narrow minded view of sexuality and gender society tends to have, and to the ever increasing number of transgender, gender fluid, people who tell the world “I am woman/man hear me roar”,  I take my hat off. My own battle to be viewed as a person with rights and deemed fit to marry my life’s love has rapidly evolved, and I just know your turn for acceptance is coming. Maybe not in a year, maybe not even in ten. Real, lasting, rightful change takes time, but it will happen. To those who stand in its way, I cast my eyes of contempt, my voice of scorn, and my hope that Karma catches you sooner rather than later. May it cause some nasty turn of events in the lives of those who take issue with someone else’s business. They need to mind their own and shut the hell up.

32 thoughts on “Change Is A Four Letter Word”