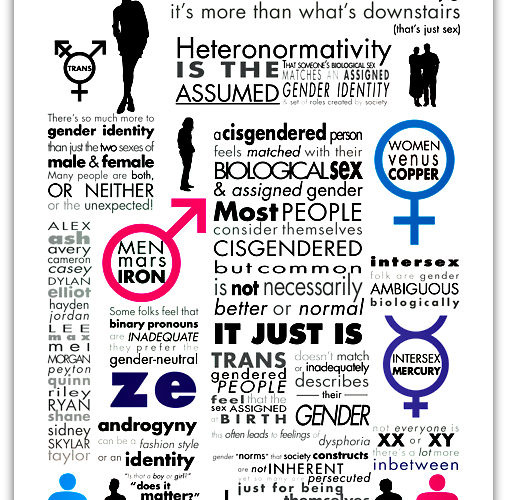 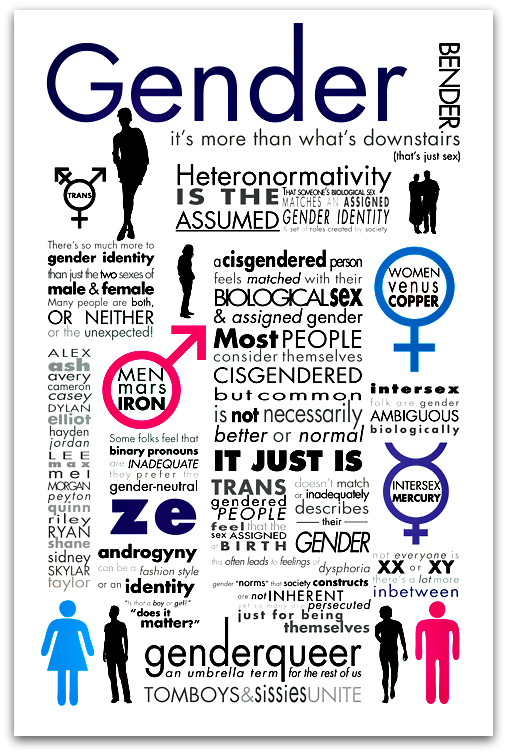 The Ignorance of Gender Intolerance

The definition of tolerance in Webster’s Dictionary is: Willingness to accept feelings, habits, or beliefs that are different from your own.

I think the idea of tolerance get a lot of lip service, especially in the kink community and in the twenty something crowd, but I’m not so sure this acceptance of feelings or habits different than yours has truly been embraced, even by those of us who consider themselves tolerant of others and their differences.

My generation didn’t grow up truly being taught to be tolerant of people unlike ourselves. It was in my home, but that wasn’t the norm. My parents were front runners for their generation when it came to acceptance of those with a skin color that wasn’t white. We didn’t have African American kids bused to our school until I was in 3rd grade, and even then; they had a different lunch hour and different playground times as us. The idea of that seems ridiculous, but that was the way it was, and I live in a big city. It wasn’t until 5th grade that black children appear in my class photos, and the idea of same sex couples being open, let alone married, never entered anyone’s mind.

The above stuff isn’t really what I want to address though. Nor is the tolerance of bisexual, homosexual or gay people. We are making headway here. Not as much or as fast as I would like in my state, but we are. What I want to really speak about is the acceptance or tolerance of those who are transgender, transsexual, or even cross dressers. Now please don’t give me backlash for including them or excluding a type of gender identification I left off. This subject really isn’t in my expertise. I am addressing it because I have friends who are some or all of the above, and while I can identify with discrimination because of my orientation as a lesbian, I can’t even begin to know what it’s like to feel you are in the wrong body.

We have a good amount of people in our kink community who fall under the titles above. A few of them will dress to the nines even when we are at a munch among non kinksters. One friend loves to strut his other half and has clothes and shoes I envy. He is very stylish as his female half and doesn’t give a care what anyone thinks. I have seen people’s eye popping out of their heads in shock, but really, he doesn’t dress as Marcella to offend or shock anyone, he does it because he loves Marcella as much as he loves being her. He isn’t throwing his kink in anyone’s face. He doesn’t strut about and intermingle with the vanilla crowd to purposely shock people, but he doesn’t hide in a corner either.  He is just being himself.

Unfortunately, my friend is an exception. Most of those who have a deep desire to set their inner woman free hide because of lack of acceptance. Their families wouldn’t get it, and while Marcella roams free, she has a very confident air and I don’t think many would have the nerve to comment. In addition to that, his/her wife is super supportive. Marcella is the envy of many of my friends who have a deep desire to be free, but lack the confidence because of the probability they will be shunned. This fear is felt by both those who identify so strongly as being a woman that they feel they are living in the wrong body, and those who just feel wonderful wearing women’s clothing. their rate of heartache varies, but the cause is the same. Lack of acceptance by society.

There are those who have had the courage to have the surgery and take the hormones that will allow them to live as the gender they feel, but the hardships faced monetarily, physically, and emotionally makes it a struggle before and while they are transitioning. Women who wish to be men seem to be accepted a bit more than men who wish to be women, though I’m not sure the reason. Perhaps because society has come to accept masculine women. Those who have transitioned and are ‘passable’ endure less scorn, but as a whole, narrow minded individuals, including those in government positions, really make life hell for so many.

In another post I told everyone about a friend who had lost his job because he was outed for his kink which included feminization pictures. His entire life was impacted financially and emotionally, and for what? Why? What right does anyone have to pass judgment and really, why on Earth is it anyone’s business if someone born as one gender feels a deep inner need to be another? Those in judgment don’t know how someone who is trapped in the wrong body feels. They don’t have to endure the rejection of family and ‘friends’ when they decide to come out and do what their heart screams that they must do. Those who ridicule don’t know one damn thing about the people they are turning their noses up at and condemning.

Is it REALLY such a huge deal if a kid who is born male but dresses and acts female at all times uses the girl’s bathroom at school? Being transgender doesn’t make you a sex freak and if the child has a long history of dressing and being a girl then he/she isn’t there to spy on or be perverted with any of the girls in the restroom. I know, people worry that their girls will be exposed to a freak and such, but really, those who want to use the restroom of the sex they feel they are just want to feel as if they are in the right place.

Is it REALLY such a big deal if a male dresses as a female or a female as a male? Who does that hurt? Why must they be subjected to bigotry? Most cross dressers I know reserve their dressing in women clothes for events or parties where they know no one will raise an eyebrow, but those who are transitioning and are living the mandated time as a man or a woman prior to surgery have as much right to go shopping, out to dinner, to movies or wherever without stares, snide comments or harassment.

Do those who are so appalled know that transgender and transsexual people had to fight a huge inner battle to even do what they are doing? They had to face their family which resulted in estrangement for some. I used to know a guy named Whisper. This guy was young and poured his heart out in his blog as he fought to make his family understand his need to be a girl. He knew it would be many years before he had enough money for surgery, and so finally told his family and tried to dress and act as he felt rather than what his body dictated. His father wouldn’t speak to him, and his mother continuously tried to take him to church so he could be saved. All Whisper wanted was to feel pretty and whole.

I don’t see much ignorance and refusal to accept transgender and transsexual people in the kink community as I do some of the bigotry that happens with other fetishes, and that’s good, but society as a whole just needs to step back and ask themselves why exactly they must fuss and be a loud mouth, or ever quiet, bigots regarding those who wish to be the opposite sex. It isn’t about them and the feeling of ick they feel when they see a man dressing as a woman. Just look away if you don’t like it, you have no business making rude comments or expressing an opinion that wasn’t asked for. Those who are so intolerant should be bound in front of a TV showing nonstop Ru Paul’s Drag Race for 24 hours.

The newest generation seems much more tolerant of skin color, cultural differences, sexual orientation, and hopefully that tolerance will trickle down to acceptance of transsexual and transgender people too. A recent study done was up on Yahoo news. It the recorded the responses of kids from about ages 5 to 16 who viewed lavish marriage proposals between two sets of same sex couples, one man and one woman. Only one of the kids said “They can’t do that”. One also was confused saying “You mean a girl marrying a girl?”, but the child was probably six or so.  Most thought the proposals wonderful, touching, or sweet, so there is hope.

I live with a small bit of the bigotry people born as the wrong sex have to live with, and once I retire I will be open to the world as lesbian and kinky. Until then I will just be happy my friends and family understand and accept my relationship and marriage with Beauty. That’s five years of hiding at work, and it seems long, but I wish that those who struggle with gender identity had only five years to be open, free, happy, and accepted by all. They are people with hearts. They are people with brains. They are people with ethics. They are not people out to corrupt children. They are not dressing as they do or wearing makeup and a wig to make you uncomfortable, they are just people who want to live the life they know they must in order to be happy.

3 thoughts on “The Ignorance of Gender Intolerance”