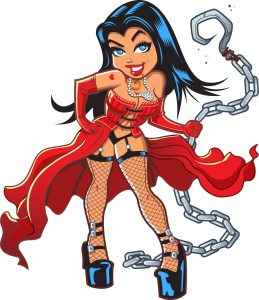 Beauty and I are going to a major kink event in a couple of weeks. You see and experience all kinds of things at these events, much of which might make you squeamish or wondering how anyone could do that. I’ve been around the block now for more years than I will admit to, but one thing that doesn’t seem to change, is the disrespect some people show to others about their chosen kink. We spend a lot of time dealing with the show respect in BDSM. You are to respect your dominant. You are to respect your submissive’s limits. You are to respect someone’s safe word. Show respect by not touching something (people and toys) that belongs to someone else. Show respect for people’s D/s relationship by refraining from sticking your nose into their dynamic. The list could go on, but you get my point. So why do we do all the things I just listed because they are expected in our community, and yet only pay lip service to the notion of respect for other’s chosen fetish?

On any given day, I can look at the groups I am a member of on Fetlife, or go to a gathering of fellow kinksters and read about or hear people being disrespectful of other’s fetishes. Oh, I hear people saying as long as it’s safe, sane, and consensual between two adults, then it’s okay but then they don’t abide by that saying. The only exceptions that come up are kids and animals, yet people frequently bad mouth or laugh at things that are outside their realm of comfort. Don’t get me wrong, it is okay to say “Oh no way will we try that.” within a private conversation with your significant other, share a private giggle about the guy dressed like a chipmunk in the dungeon, or even join in a discussion be it online or in person if you have respectful questions about a fetish you haven’t tried, but it’s not okay to talk behind someone’s back about how stupid, gross, crazy, or just plain icky their kink is. Beauty and I are free to refrain from anything that won’t heighten our BDSM experience or lives, but to disrespect someone else because we don’t want to go there with their chosen kink, is wrong, yet seemingly acceptable.

News flash people, just because it isn’t your thing you have no right to disrespect someone else for liking it. Being a lesbian, I choose not to have any intimate interactions with men. I will be present and supportive if any of my service sub guys wants someone to top them in a sexual manner, but I just am not comfortable giving anal, doing CBT, or anything that goes beyond impact play with them. I am sure there are a huge group of hetero women who do not understand my aversion, but for the most part, sexual gender preference has become not only acceptable, but expected. Unfortunately, that isn’t the case for so many other things.

I see and hear submissive men bashed because so called macho guys (sub guys can be macho!) can’t wrap their heads around a man being submissive to a woman. I see and hear slave women bashed because they need permission from their Master to do something or because they have agreed to TPE at the highest level. I hear sissy men bashed, those into adult baby sneered at, daddy and babygirl dynamics spat upon because narrow minded people don’t get that it’s a role play/relationship dynamic that the consenting adults need/choose and not something that really means they like little kids in an improper manner. I myself have watched someone do flesh hooking or allow their Top to make their boobs a shish-ka-bob, and have felt more than a little squeamish about it. Play with surgical staples or play that involves nailing a guys scrotum to a board really makes me say yuck, so guess what? I don’t watch! There are a huge number of ways to play going on at any given time in the dungeon and at the classes of a major event and Beauty and I will either choose a different class or simply move on if we are watching others and quietly visiting in the dungeon.

I’m not into pee play, scat, diapers, needles, cutting, breath play, anal sex with guys, CBT, having a no limits slave, or someone sucking on my toes, but that doesn’t mean others can’t be into it either. I have no desire to dress Beauty up like a dalmatian and dress like Cruella Deville and march her around the dungeon, but I won’t ever tell you, you can’t because it isn’t my business. I like a variety of different classes because it allows me to see new techniques. I have yet to learn fire play, but it isn’t in the ‘Oh, hell no’ department anymore. There are things I am almost certain I will never do such as needles and CBT, but others that moved into the like column after I learned how to do them correctly. I will always have my hard limits. Hard limits are hard limits for a reason, but unless someone is under my roof and wanting to do something I forbid here such as messy body fluids or breath play, I have zero right to try and tell the players what is right or wrong.

I will date myself here and ask my readers if they remember the old “I’m Okay, You’re Okay” thing done by Marlo Thomas a million years ago to get kids to accept people’s difference, because really, unless you try and break mine or Beauty’s hard limits, we are all okay. Marlo Thomas tried to teach us tolerance back then and erase the bigotry in people’s hearts because bigotry is not okay. People have accepted that fact when it comes to color, sexual orientation, religion (mostly), and other kinds of discrimination. It simply isn’t okay. Let’s stop just paying lip service to the idea of being tolerant of other’s kinks. You know the vanilla’s don’t understand us or what we do for 95% of the things we like, I can accept that because kink is not for everyone. What I can’t and won’t accept is the negativity of others in the lifestyle for things they think are disgusting or for some reason wrong. If it’s between two consenting adults, it’s okay. Grow up and have some manners people. Private dislikes should remain private because really if you aren’t stepping on my boundaries; I am okay, and you’re okay.

One thought on “Respecting Other’s Kink”