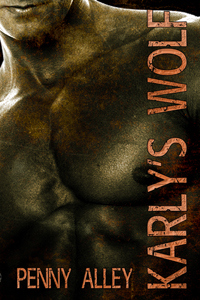 On the run from her abusive husband, Karly Whitaker flees across state lines, finally settling in an old mining town called Hollow Hills. Starting over had never been so scary, and to make it all worse, her first night there, she hits a dog—the biggest, blackest, wolf-like dog she’s ever seen. Although he appears more dazed than hurt, Karly takes him home. Now all she wants to do is hide, but fate, it seems, has other ideas. The local residents are determined to make her a part of their celebration, Fish and Game won’t leave her alone, and every morning Puppy vanishes, leaving her to deal with Colton Laurens all on her own. Colton Laurens—the dark-haired, honey-eyed Game warden, whose gentlest touch makes her battered heart ache and whose hungry kisses burn her from the inside out. For the first time in her life, Karly knows what it’s like to live unafraid. But Karly has more than ghosts haunting her footsteps, and not everything in Hollow Hills is what it seems.

“The Alpha male of Hollow Hills?” She tried not to laugh because for all that it sounded silly coming out of her mouth, both he and Mama Margo had used that word quite seriously. “All right, so what does an Alpha do?” She couldn’t resist knocking on her chest and offering a sedate Tarzan yodel.

“No, I’m sorry. I’ll be serious. I’m curious. Besides “catching” his Bride—which stirs up a whole slew of new questions, by the way—what does an Alpha do?”

Having rounded a curve in the road, Karly could see the summit of the Ridge up ahead. They weren’t close enough yet for her to glimpse the tents through the trees or the colorful pennants, but she could hear the shouting and the laughter and the occasional snap of cloth in the breeze.

“We lead,” Colton answered, his expression seeming to close the nearer they drew to the crowded fairgrounds. “We guard our territories.” He looked at her then. “And we protect all those within it.”

The implication of what he was trying not to say wasn’t lost on her. Karly flushed, a slow burning heat that moved up from her core to scald her cheeks. She had to change the subject. “And you decide who gets to be Alpha via ragtag games of tackle football?”

“No.” For the first time, his flash of a smile seemed genuine. “The games are simply a means to an end. It gives you a chance to show off your strength to potential females, and if you’re lucky, you can also knock a few of your competitors out of the running.”

“Is that what you were doing yesterday with that boy?” Having finally reached the summits’ intended parking lot, they stepped off the road together, gravel crunching under both their feet.

“That’s what he was trying to do to me.”

Despite the veiled ruthlessness that she had witnessed yesterday, Karly liked walking beside him. She liked hearing the crunch of his boots grinding in the loose rock and she liked feeling the heat of him, even hotter than the surrounding sun, every time his arm bumped lightly into hers. On the few times when he pulled a little ahead of her, she really liked watching him walk. That swaggering strut of his struck her as sexy. He didn’t even seem to know how sexy that was, and that appealed to her, even though she knew it shouldn’t.

“So what’s on the agenda today? More football and beating each other up?” Karly stopped when he did, but while he stared off toward the banners and tents, she continued to study him.

“Not today,” he said softly, and then began to smile. “Sounds like they’ve got something else planned.”

Karly tried to hear what he was, but it was just shouting and cheering. To her, it said football game, but as they approached the same grassy field where Colton had tackled and been tackled the day before, instead of teams of men beating each other into the ground, today it was the women’s turn. In this case, the term “the gentler sex” seemed to hold no meaning.

“Oh whoa,” Karly said, trying hard not to sound judgmental. Just as the men had done the day before, the contestants were engaged in a rowdy game of skins versus skins. Some were wearing sports bras, but most hadn’t bothered, and all of them wore dirt and bruises from no-holds-barred tackles to the ground regardless of who had the ball. “These are your Bridal choices?”

Colton grinned. “I do love our old, time-honored traditions, don’t you?”

Karly’s startled laugh cut into a wince when four women collided and the one on the bottom of the pile came up bloodied, spitting teeth and grass, and with an arm that bent in ways no human arm should. “Oh wow, these girls are serious.”

Colton chuckled. “Fond as I am of curry, a woman’s cooking skills aren’t half as important as strength, courage and good family ties. There are a lot of men here competing for Brides and not one of them is going to care how well she cooks.”

Another bone-crushing tackle resulted in two women picking themselves up off the ground. Both spat blood, but only swiped their mouths and rejoined the next line up. This was not hair-pulling, bitch-slapping, name-calling, feminine warfare. This was every bit as brutal as the men had been the day before.

“This has Bridezillas beat all to hell and back,” Karly said flatly, and then looked at him. “You want to marry one of these women?”

His smile dimmed around the corners of his mouth. He inclined his head. “Want doesn’t have anything to do with it. But yes, in three days’ time, we will have our Hunt and I will take one of these women for my Bride.”

He did not look happy about it. Funny, but she kind of felt a little disappointed too. She wasn’t even fully divorced yet. She didn’t have a right to feel like this.

Karly faced the field and tried to study his options with an unbiased eye. “But you don’t know which one?”

The look she flashed him now was all but annoyed. “Oh, come on. What are you, gypsies?”

“Not exactly.” He made no effort to change his answer.

Karly cringed when the ball was hiked and two walls of shouting women collided. It might have been simply the sound of the impact, but she thought she heard bones snap. “Oh my God.” She tried to cover her eyes, but couldn’t make herself stop watching. “What if you don’t suit? Apart from potential chest sizes, what do you know about any of these women?”

“I know they care about our traditions.” Colton glanced at her sidelong. “I know they are fierce and determined enough to suffer pain in the hopes of attracting my attention. And I know that they will bring that determination into our marriage, because no one wants to be miserable with the one they have vowed to share the rest of their life.”

Karly flinched again, but this time it had nothing to do with what was happening before her. “What if you are miserable?”

“Then we’ll separate. We aren’t perfect, but we aren’t draconian either.”

Another hike of the ball resulted in another bone-jarring tackle, this time punches were thrown and she could have sworn one girl bit another. Karly folded her arms across her chest, hugging herself against an answer she, for some reason, didn’t really want to know. “If you have to pick, have you at least whittled down your options?”

A ghost of his former smile returned. Colton faced the field, folding his arms across his chest now too. “Sadly, I haven’t dedicated the proper attention to even begin my whittling. My…family is not at all pleased with me.”

“Your family has to approve of her too?”

“At this point, they won’t care just so long as I get one. Any one.” He didn’t sound happy about that, either.

“Okay.” Karly studied the field. She pointed to a blonde, her long curly hair pulled back in a ponytail and her bouncing breasts covered but pertly outlined by the wife-beater t-shirt she wore. “How about that one?” She tried her best not to think about Colton covering that woman the way she’s dreamed he’d done to her the night before.

“Not if you paid me,” Colton said flatly.

That drawling rejection made her so ridiculously happy that she actually smiled. “Why not?”

“Her father’s been trying to get his hands on Hollow Hills for years. He failed at brute force, so now he’s trying through diplomacy.”

“And if you married her, he’d as good as succeed,” she concluded. “I didn’t realize politics were also involved.”

“All right.” Karly studied the field again, taking her time now to pick and choose among the competing hopefuls. “What about that one?”

“The brunette with the dragon tattoo?” He snorted when she nodded. “She’s barely more than a child.”

“She’s old enough to have a tattoo,” she pointed out.

“I’m thirty-eight. I don’t want a Bride I’ll have to spank and send to bed without supper.”

Karly quickly bit back another smile. “All right, so one of the older ladies.”

“Not too old,” he corrected, his eyes now sparkling with amusement as well. “I don’t want to push her wheelchair quite yet either.”

“No toothless, old biddies,” she agreed and scanned their options. She’d been trying to steer clear of the shirtless ones, but feeling emboldened now, she chose one. “That one, the short-haired blonde.”

“She does seem very strong. And if she’s not thirty, then she can’t be far from it, so no spanking required.”

“More’s the pity. She’s got the perfect backside for it—nice, round and jubbly.”

That caught her so off-guard, that Karly actually whapped him on the arm as she laughed. Colton made no effort to retaliate, but flashed that good-natured grin instead. In spite of herself, Karly relaxed even more. “I can’t believe you just said that. All right. So, she’s strong, grown, has a nice butt, and since she’s running around in public without her shirt on, we’ll just assume for now that she’s open to kinky sex. All that’s left is to find out what her family is like.”

“Have you talked to her yet?”

“Enough to know she has a nasally laugh.”

“So, you want a strong, older woman from a good family, into kinky sex, but without the nasally laugh.”

“Is that asking too much, do you think?” He bumped his shoulder to hers, lowering his head in conspiratory humor, which made her feel as if he were trying to get intimately closer. She liked that too.

“I think you’d be better off looking for someone who makes a good curry.”

You can read more of Karly’s Wolf on Amazon.