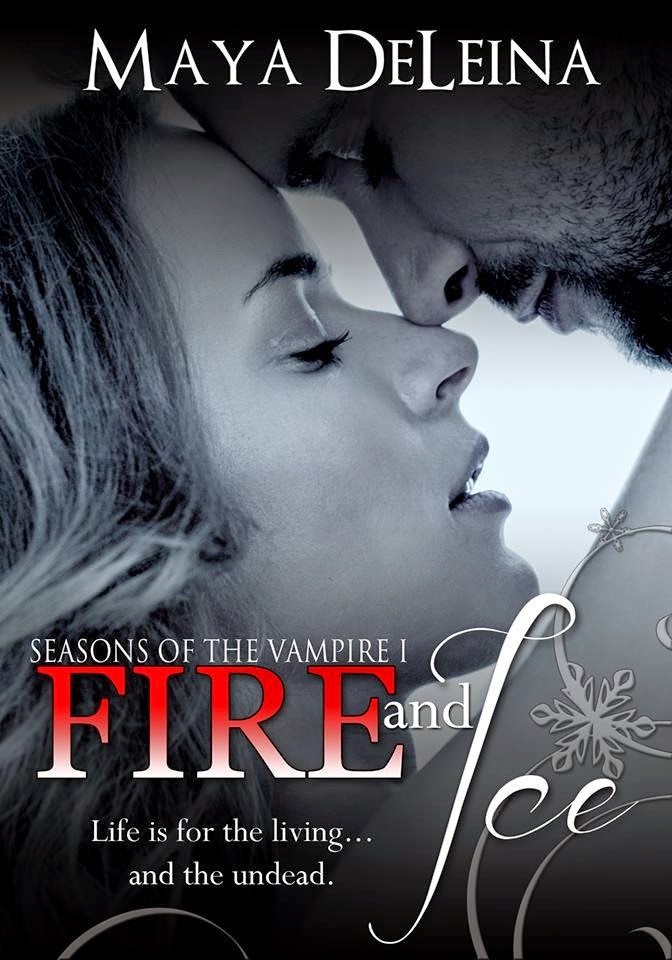 Title:  Fire and Ice
Series: Seasons of the Vampire I
Author: Maya DeLeina “In the depth of winter I finally learned that there was
in me an invincible summer.”

Dark yet welcoming, the restaurant pulled them in with its
ambiance.
The plastered walls were sponged in color blocks of a deep red and
black. The ceilings were painted in a high polish black and stone black tile
lined the floor. Striking kabuki masks and detailed silk kimono robes lined the
walls.
The women shared the restaurant with no one except the spiciness
of sriracha seasonings and robust scent of the rich soy sauce that filled the
air. They sat on their high top stools at the bar, enjoying the food and the
reprieve from the heat.
“Air conditioning is nice, huh?” Noel asked.
“Yes, I’ll give you that. I forgot how sticky this weather can be.
I think we have to get used to having bad hair and make up days.”
“I think you’re right.”
Suzanne finished sipping the last of the broth. “The soup is
amazing. It’s not the kind of cuisine I had in mind for our vacation in Key
West, though.”
“I had no clue this was even here. But, I needed this…helped with
my hangover.”
“Feel better?”
“Absolutely. I think I can tackle a Sandhill Hooker shot or two
today. After all, we are on the infamous Duval Street.”
“Okay, pickle juice that way…now you’re talking.”
She looked around the place and smiled. “It’s pretty cool in
here.”
Suzanne leaned her head back. “And look at how high the ceiling
is. I like all that exposed ductwork. I wonder what this place was before?”
“This used to be a club,” said the waitress as she carried in a
case of liquor from the kitchen to the bar.
“This was a club?” Suzanne asked.
“Yeah. You two new to Key West?”
“First time here.”
Noel sat quietly listening to the conversation unfold between
Suzanne and the waitress.
“You want a little history on this building you won’t hear about
on any tour guide?” The waitress asked as she unpacked the box and carefully
placed the bottles on the lighted shelves behind the bar.
“Sure.”
“This restaurant and the entire vacant spot next door used to be
one big club.” The waitress turned around and pointed towards the ceiling. “There
was an entire second floor up there. The owners of the restaurant demolished it
since the place is small and narrow. The height makes it feel spacious. You can
sorta tell how it looked like the second floor with that small area they kept
above the kitchen. The red spiral staircase you see leading up to that
area…that’s original to the building.”
“Yeah, taking the second floor out does make it feel bigger. So
the club must’ve been packed all the time to have two floors, huh?”
The waitress laughed and leaned against the counter. “They didn’t
advertise.  And you notice it’s off of
Duval right?”
The women nodded.
“Not much foot traffic on this street like Duval. This was the
hush-hush place. You had to get invited. Secret door knock and password would
let you in—extremely private and exclusive.”
“You ever get invited?”
“Oh, God, no. I have no idea who
got invited, but I wasn’t one of them. In fact, I never knew the club existed
until a friend told me that the owners were going to put the building up for
sale a few years ago. I was like, ‘what
club?’ And the thing was, I walked past the place many times and always
thought it was an abandoned building.”
“So what was the deal? Why was it private? What went on?”
“Rumors claimed it as an adult playground.”
“If the place was still in operation, somehow I know Suzanne would
get an invite,” Noel chimed in.
Suzanne flashed a wicked smile.
“Possibly,” the waitress said. “Get’s your thoughts going, right?
Like, what exactly happened in there? Who went there? But the one thing I was
always curious about was seeing the place. They say it was like being on
another planet.”
Noel awaited a break in the conversation to jump back in with her
questions. But movement from out of the corner of her eye caught her attention.
She snapped her head to look at the loft area and gasped.
“What?” the waitress asked in a concerning tone.
She scanned the area in confusion.
“What’s wrong?” Suzanne asked.
“I-I thought I saw something up there.”
The waitress peered into the kitchen. “Can’t be. No one else is here except
Jesse and he’s at sink.”
“What’s that door up there?”
“That’s the access point to the space next door, but its sealed
shut from the other side. Trust me. I’ve tried to see if I could get in to
sneak a peek.”
“What is it that you think you saw?” Suzanne asked.
She shrugged her shoulders as goose bumps paraded along her skin.
The same feeling stirred again—as if she were being watched. “I thought I saw
someone looking down on us from that railing.”
Suzanne turned to the waitress. “We partied a bit last night.”
“That tends to happen in Key West.”
“I think we’ll take the check and I’ll get this one out for some
much needed fresh air and vitamin D.”
“Sure thing.”
“I’m not crazy, Suzanne,” she whispered as she reached for her
purse.
“I didn’t say you were. I just think you need to get outside.”
“Sammy told you right?”
“What?”
“The boat? Me freaking out that someone was watching me last
night?”
“Yes. But, honey, I think you’re just thinking of Dante being in
this place and visualizing him. That’s all.”
The waitress slid the check across the counter and Suzanne
immediately snatched it up. “My treat. You get drinks tonight.”
“Thanks.”
Suzanne placed the cash on top of counter. “Keep the change,
darling. Thanks for the 411 on this place. Very interesting.”
“No problem. You guys go have fun.” 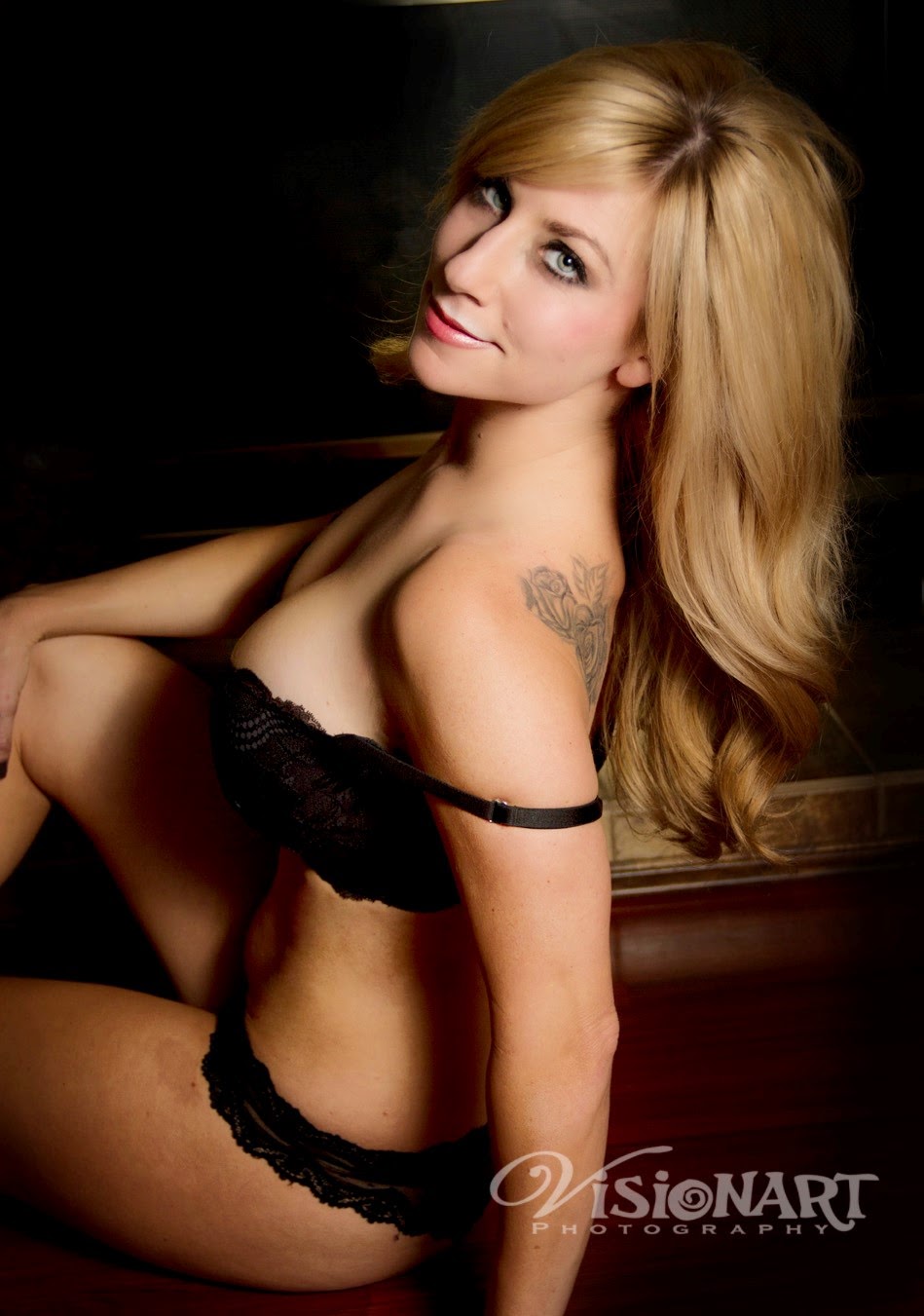 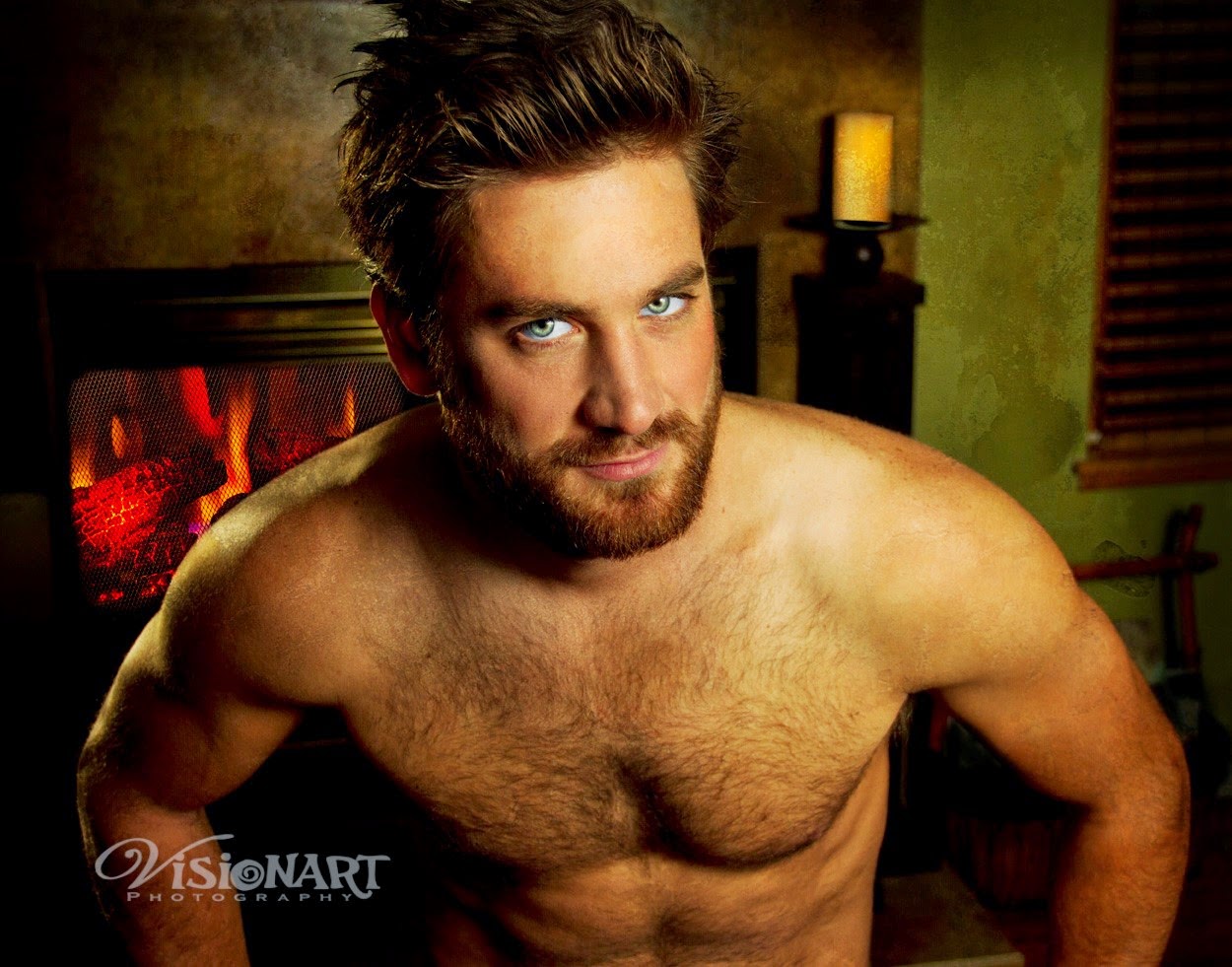 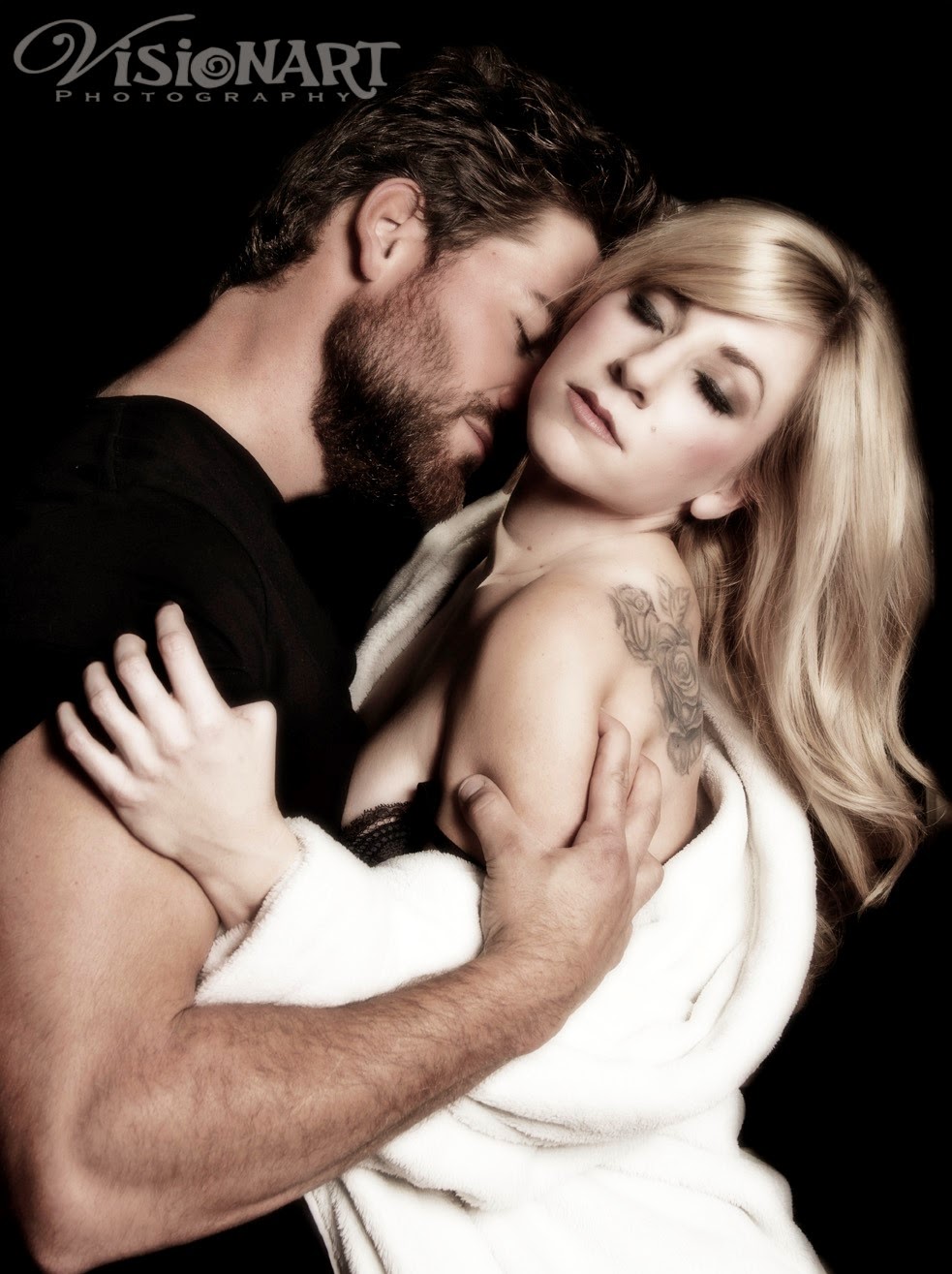 “You don’t know me, Noel. I may look like something you’re used
to, but on the inside, I-I am not a man—
She lifted her head and sensually kissed his chin, breaking him in
mid-sentence. “I know you can’t offer me anything past this. I get it. But you
are a man and I want you.” She tilted her crotch upwards and spread her legs
wider, giving him more access to her pussy that was wet and ready. She circled
her hips slowly, rubbing her moist and swollen lips against his long, hard
shaft.
“You don’t understand,” he whispered with an ache of torment in
his voice. He buried his face into her neck. “You just don’t get it.”  He sucked on her flesh right where her neck
met her shoulder.
“Oh!” Her eyes rolled back in her head. She shut her eyes tight,
concentrating on the sensation he stirred in her body.
Most women say it’s their nipples, but for her, the most sensitive
part on her body lie at the crook of her neck. A treasure-trove full of
pleasure nerves, her neck proved her undoing. If a man kissed her at the right
spot, with the correct amount of pressure, she could be sent over the edge. And
with his performance, Grayson delivered her right to the gates of heaven.
“I can come with you just worshiping my neck,” she whispered
seductively in his ear.
He continued devouring her flesh. He caught her muscle in his
teeth and bit down.
“Jesus!” she yelped in surprise.
A burst of iciness shot through her muscles. The burn traveled all
through her shoulders, down to her fingers. Another trail went into action,
extending up past her neck and wrapping around her skull like a glove.
No pain existed.
A new sensation emerged.
The cold turned to heat, soothing her down to her bones. All the
tension she held in her neck and shoulders since the accident faded.
And then that unmistakable feeling rolled in.
“I’m gonna come!”
She hadn’t a clue what he was doing or why he obsessed with
kissing her neck.
She simply said a silent thank you for whatever magic spell he
performed on her.
He remained planted at her neck while his hand positioned his cock
at her opening. She continued riding the waves of pleasure when he entered her.
He released her neck and focused his eyes on her body. Hunger burned in his
stare.
“Take me,” she begged.
He huffed and wrapped his hands around her waist. He kneeled back
and tilted her pelvis up as he thrust into her.
She gasped at the angle of his entry.
He speared her with his luscious cock over and over again, slow in
his rhythm, but steady and deep in his penetration. He fit snuggly inside of
her, stretching her just to a point that transformed the woman inside of her to
an animal. “Yes, do everything to me. I’m all yours.”

Maya DeLeina is a multi-published Erotic Vampire Romance Author with Siren,  Evernight and Ellora’s Cave Publishing.
Her current series includes Ambrose Heights Vampires, My Naughty Vampire and Vampire Architects.
Born and raised on the Hawaiian island of Oahu, Maya could be seen at her
favorite beach, Lanikai, performing with an all-girl band where she played
keyboards, guitar and provided vocals, working as editor in her high school’s
yearbook and volunteering her time at a humane society through UH of Manoa
civic groups.
In 2006, Maya relocated to Colorado. Her crystal blue oceans, waterfalls and
eighty-degree year-round weather were traded for four season weather,
enchanting forests and majestic mountains, which led to her rekindled love for
vampires.
In winter of 2010, she penned her first manuscript and by 2011, Flesh Fantasy was
under contract and released by Siren Publishing. To date, Maya’s titles
includes Flesh Fantasy, Veil of Seduction, Blood of Luna, and Dark Companion, with Fire
and Ice and Crimson Snow being added to her bookshelf by the end of 2014.
In mid 2014, she banded with other Colorado romance authors to form the group, Mile High
Muses, in which Maya serves as “The Vamp”. Catch her Forbidden Fruit Friday blog and guests she hosts
on Sultry Saturdays.
Not only does Maya have theatrical book trailers that bring her sexy vampires to
life, Maya and her vampires were featured in Singer/Songwriter Jill Cohn’s music video “Blessing
Moon”.
Social Media:
Website: http://www.mayadeleina.net
Blog: http://www.milehighmuses.com
Twitter: https://twitter.com/vampauthormaya
YouTube: https://www.youtube.com/user/mayadeleina
Facebook: https://www.facebook.com/EroticVampireAuthor?ref=br_tf
Pinterest: http://www.pinterest.com/mayadeleina/
About me: http://about.me/maya.deleina
Amazon: http://ow.ly/BQw0l
Barnes and Noble: http://ow.ly/BQwac
iTunes: http://ow.ly/BQwjv
Maya’s Gypsy Groove Station: http://www.pandora.com/station/1335009332057028278
Maya’s Arabian Dream Station: http://www.pandora.com/station/846337414931101366