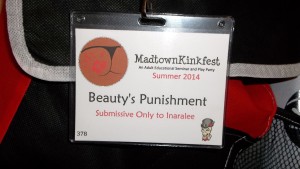 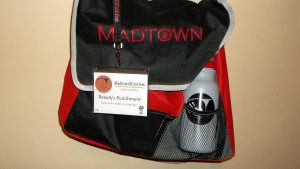 I know I planned a ‘you are there’ kind of posting, but it simply didn’t pan out. There was just too much to do. I only finished half of my interview with Tamed on triggers because we talked too much about general things during the ride to Madison. Best laid plans and all that. She has the rest of the questions and is going to send them back. We just had to catch up, and once Madtown began, all of us were busy.

Day One of the actual convention:

We slept in, which was the plan, and were rested up for the classes when they began. The first class was on sharp and pointies, and it was very good. I definitely took some things away from the presentation. Though the class was called Spikey, Pokey, Ouchy Oh My!, it had info on making it sensual play, which it what I do most with Beauty, into deeper, and sometimes heavier kind of play.

Things you can use, and most of her stuff came from the dollar store.

Scrub brushes – These have a wide variety of firmness with their bristles. You can run them over the body softly or firmly to change up sensations, run them over an impact area, or even spank with the bristle side.

Paint Rollers – These can be soft and fluffy and come in a wide variety of sizes. My absolute favorite takeaway from this was to dip the roller in water and then freeze it. This makes a fabulous icy experience that can be wonderful on a hot day, or just evil. Think large rolling ice cube.

Melted wax – Check your candles and the wax they produce BEFORE you use the wax on someone. Cheap candles can have wax that is too hot and will burn. Wax is messy but fun. If you put some oil such as vitamin E on the skin in preparation the wax is easier to remove. Again check the burn temp on the inside of your wrist just like with a baby bottle, vitamin E and all. The Tool Shed in Milwaukee carries Japanese drip candles that burn at a low temperature and are made of paraffin, and come in three colors from Doc Johnson.

Cling Wrap – You can wrap someone anywhere on their body to give them a snug, bondage feel and then use a knife to slit the plastic. It is a mind fuck and will feel as if the skin is being cut. Option to using a sharp knife is just a regular dinner knife.
**I would not do this even after 15 years of being kinky because I am not trained in knife play. Do not do this if you are not trained!!!! **

Basic utensils with hot and icy cold water – Anything can be transformed by dipping it in hot or cold water. I’m not talking about boiling. You don’t need it that hot.

Claws – I love my claws and know at what point they will leave a welt that will bleed a little, a lot, or not at all. Claws can be transformed by temperature and electricity. I believe mine are from Hammerfell Armoury.

Mind Fuck – Show your bottom (play partner on the receiving end) a sharp knife and then blindfold them. Proceed to use the edge of a credit card or butter knife to run all over their body (Note: A credit card is good for removing wax in a sensuous or evil way). Your partner will think you are using a sharp knife all over them. THIS MUST BE DONE WITH PARTNERS WHO HAVE DEVELOPED TRUST.

Steel Wool – Actual steel wool will leave fibers in the skin and SOS pads are a no. You can get various types of ‘metal’ scrub pads at the dollar store. These can be rubbed all over or concentrated to give an abrasion.

All in all, sensation play doesn’t have to be all soft and fluffy. It can be, bring on the rabbit mits and the feathers, but it can also be ouchy, bring on the vampire gloves and the whisk dipped in ice water.

The second class was Interrogation Play – This is not my thing. I could not do interrogation to someone. That said, the bottom consented to what was done. She would not have volunteered if she didn’t enjoy it.  I will try to get someone who does interrogation play to write a piece. I’m not going to report on the things used in interrogation play because honestly, I don’t know how to use them to that extent in a safe manner. There is a fine line and an edge to this kind of play and I do not feel comfortable reporting on it.

Cock and Ball Bondage – This class was hysterical. To begin Lolita Wolf asked if anyone was single. What she meant was, was there anyone there alone. I said that I wasn’t alone, I was with my wife, but we were indeed without a penis. We were then matched up with a penis without a home so we could practice the bondage. (Side note: We had a young penis that was quite nice, but his mistress changed him out with an old guy penis. I imagine she didn’t want anyone to break her young penis.) Our stunt penis was very cooperative and nice. It was fun.

This was not a class in CBT, it was a class in cock and ball bondage. You rope it up so you can do other things with it. We learned some basic ties that allowed us to rope both the balls and the cock. Bondage is harder than it looks. I have always had issues with being rope impaired.

First we roped up only the penis, starting with a basic crossover and looping around the shaft. Next we did the cock and then the balls with one tie, and lastly was a tie that looped around the shaft to anchor it, but then concentrated on stretching the ball sack so the balls were tight in the sack.

She then showed a tie which roped the penis and balls, but left loops on both sides to use for hanging things/weights.

You can break a penis!!! A flaccid penis is safer to work with than a hard one. A hard one can break much easier.

Don’t rope a penis for more than 15 – 20 minutes. When a penis becomes hard, you are keeping the blood from flowing out with the tie. Blood flow in and out is essential for the health of body parts.

Don’t tie a penis too tight. You can do internal damage.

Guys who do self-CBT often keep their penis tied too long.

I advise anyone to learn before doing. That is best done in a hands on training with a mentor.

More on penis safety and CBT in my interview with Wanda.

We napped briefly after classes and grabbed something to eat before heading down to the dungeon. I was set to watch Wanda do some CBT (Cock and Ball Torture).

Friday night in the dungeon –

So, what is it really like in  BDSM dungeon? This space seemed small, but that is probably because the dungeon at Thunder in The Mountains where we went last year is huge! It has 40,000 square feet, plus a pony track and a puppy mosh pit. This space was adequate. There was pretty much the basic furniture provided and small tables to hold implements where they could fit, as well as sanitation stations. Take note, dungeon etiquette says clean your piece of equipment when you are done. There were crosses, massage tables, suspension frames, and spanking benches. These basics can pretty much provide what people need.

The people were the same ones we had class with during the day, but everyone, especially the women, like to dress in their dungeon finest. Now this can mean many things to many people. There were corsets, short skirts, long skirts, PVC outfits. School girls, littles, puppies and kittens, ponies, men in vests and chaps, nude people, lots of leather, kind of the stereotypical look as far as BDSM clothes go. What there was not was all beautiful sexy, slim, perfect haired people. Just like in any group of people, kinky people have curves and bellies, and flab. Don’t get me wrong, there are some young and skinny gals and muscled guys, but we really do look like your basic midwest people. Only we get naked or wear sexy outfits to socialize and play.

There was a witch trial interrogation, but you couldn’t hear them over the music (it wasn’t overly loud). It was just a space full of the sound of impact play, chatter, music, and such. Not a lot going on there. Funny things – One person had a bullseye drawn on their butt on one cheek and the words, “Bet you can’t hit me,” on the other. Not wise, but they certainly did get plenty of spankings. Lots of flogging done by people who are pretty good at it, some fancy flogging. You just can’t worry too much about your style as long as you’re being safe.

Over in the medical play area some friends were playing Battleship. Yes the game, but I doubt if any of you remember THIS Battleship game. This type of battleship included needles. Four people sat on one table and had outlines drawn on their chests along with the board numbers. The players (not the people on the bench) would take turns calling out a number, and the others would reply hit or miss. If it was a hit, a needle went in. Now I don’t do needles, but I do want people to know that they don’t get pushed deep into the skin. It’s more under the surface, and surgical needles are used. They are very clean, and the players wear nitrile gloves. I didn’t watch too closely because needles squick me out a bit. In the end Tamed’s battleship was sunk and she was out.

The best scene had to go to two gals who were connected by ropes attached to a line of clothespins zippered across their boobs and tied to their foot. So a zipper is a rope that runs through clothes pins in a line. When pulled off it hurts! Both girls had one foot off the floor and that foot was attached to the zipper on the other gals breasts. If one of them rested their foot or had it bob too much, off would come one or two clothes pin from their friend about 6 feet away. Every now and then their top (Master? Friend?) would tighten the rope so their foot had to stay elevated even higher. Needless to say they couldn’t keep their foot up forever and one girl was more of a sadist than the other, and finally just put her foot down which pulled the zipper on her friend’s breasts free to a loud shriek. Turn about was fair so she put her foot down as well. Fun to watch.

All in all, a fun day. We decided to get some sleep around midnight. It was a good night socializing, catching up with friends, and in one case, dressed as a rainbow unicorn, and watching various scenes.

So seriously people. This is the stuff we do. No perfect bodies doing perfect florentine (okay a very few). Just regular people doing very irregular things.

2 thoughts on “Adventures In Kink: Day One MTKF”