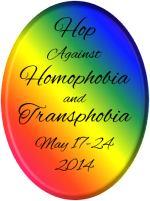 The Hop Against Homophobia and Transphobia (HAHAT) was created to spread awareness of homophobia, biphobia and transphobia, and to stand together as a writer community against discrimination of our works. The hop is sponsored by http://hopagainsthomophobia.blogspot.com/. To read more about it and keep up to date go to: http://dayagainsthomophobia.org/
The hop begins on May 17th and runs through May 24th. It is to mark the International Day Against Homophobia and Transphobia.
~~~~~~~~~~
We will be giving away a $10 Amazon gift card to one lucky person that comments on this post and leaves their email address. The winner will be notified by email a day or two after the hop ends. The gift card is redeemable by the email code.

The Power of A Whisper

When I first saw the notice about this hop, I immediately wished to be part of it. At that time I didn’t know exactly what would be required, but as a lesbian woman I have a lot of feelings and beliefs wrapped up in the issue of equal rights and homophobia. I do write lesbian erotica, but I’m choosing to write an editorial piece instead, because let’s face it, there are so many strides that need to be made and bigotry that needs to be bashed when it comes to those of us who aren’t heterosexuals.

Once upon a time I was a heterosexual woman. I wasn’t even bisexual unless you’d count the pull I felt towards beautiful and strong women. It wasn’t a physical attraction per say, it was more of a thing of just admiring them. I even tried sex with another woman but nope, not my thing. So anyway, time passed, things happened, and I got divorced. Toss in another bad happening and I became the woman I am now who identifies as a dominant lesbian. I’m not the least bit bisexual, not that it really matters. I say that because some ‘true’ lesbians don’t think a woman can completely change teams at age 35. That’s just another form of narrow-mindedness.

As I embraced the persona I found to be the best fit for happiness, I gradually told my family and friends without reprisal. As I grew and chose those who would be close to my heart, I found that acceptance wasn’t based on being a woman who fit the cookie cutter role. I was loved regardless of who I loved, and for that I am grateful and painfully aware that I am extremely fortunate. Though I must hide my marriage to my wife in my workplace, I am free to claim her as mine everywhere else. It does hurt that I cannot share her and talk of her with my co-workers as they do their spouses, but I know that this relatively small amount of suppression is mild compared to what others suffer through to be who they truly are. I cannot be legally married in my state, I cannot expose my sexuality at work, and I have railed against this injustice, but at least who I love doesn’t have to be a secret anywhere else.

Finding my way in a world that often spews hatred at those seen as deviant because of who they are hasn’t always been easy, but it hasn’t been as horrific as it could be either. I still remember when I first became aware of those who suffer great pain because of bigotry and intolerance. I met a young man online named Whisper who expressed himself in posts full of pain and rejection. We became friends as I commented on his writings, and then shared emails with him. His struggles broke my heart and opened my eyes. He was young, I think 22, but he had been dying inside each day since he could remember because he knew the body he was in, the one that made him male, the one he was born in, wasn’t right.

Whisper knew that the smallest of words, the simple pronoun of ‘he’, felt oppressive and so very wrong. It should have been and truly needed to be ‘her’ instead. She wrote of being locked in her room by parents who felt she was sick and twisted and needed a strong dose of religion to set her back to right. She wrote of the time she dared to go out as a young woman instead of the young man her small community knew her as that turned violent and tragic. She spoke of locking her bedroom door and sneaking on the pretty clothes and makeup for just a short while before hurriedly wiping away the beautiful young woman trapped by the body and the society who deemed her a man. All of her writings spoke of so much pain, a pain I never knew ran so deep. My own struggles to be accepted by all as a lesbian paled in comparison. As a lesbian I can hide who I am if I am forced to, but Whisper didn’t have that option. If she wanted to be herself, everyone would know. Her plight changed me, and made me see how agonizing and difficult her fight for acceptance was.

Things have changed since I met Whisper. The United States and those who live here are slowly realizing that the demand for equal rights by people who are gay, lesbian, transgender, transsexual, or any other label that differs from heterosexual, isn’t going to quietly fade away. We are people. We live, work, contribute to society, love, play, and do everything else ‘normal’ people do. We have rights, and we will not be oppressed any more.

I can drag out my soapbox, and often do, to yell from on high that acceptance isn’t an option and that bigotry must be dealt with head on. I devote much space on this blog to the message that tolerance must be embraced and taught. It must become the norm. The notion that my sexual preference is deviant is slowly fading, but as a woman I am lucky, for those who are homosexual or transgender face far more hate than I will ever know. We are more than our sexual identity. We are more than sex. Most didn’t chose who they love, and I cannot claim mine was a choice any longer. I am a lesbian and it is about who I love, not who I have sex with. I love my wife with the same deep and unshakable adoration borne of passion, tenderness, respect, admiration, and wonder that any man and woman feel for each other.

I am a woman, a wife, the dominant in a domestic discipline relationship, and a lesbian, and I will never give up fighting for my right to love my wife. Hear me now people, for I am also very opinionated, and I will continue to bash those who stubbornly refuse to give up their bigotry over the head with the power of my will, my determination, and with my words. Ignorance is not bliss, intolerance is not acceptable, and hatred is not an option. It is deplorable, offensive, and wrong. It’s time to stop judging people. No one has the right to dictate someone’s heart. I love who I love, and Whisper is who she is. She has a right to be free. Free from being judged by her family, her co-workers, and anyone else who thinks it’s their right to shove their prejudice down her throat.

And so for Whisper who I lost contact with a long time ago, I will stay on this soapbox. I will stand and cry foul. Foul for the laws that ban me from marriage. Foul for the bigots who feel it’s okay to spew hate. Foul for those who commit crimes of hate, and foul for those who do not practice acceptance and love for ALL people no matter their sexuality, their identity, their race, their religion, or their beliefs. It’s time for our fight to be over, because anything but acceptance has no place in a country built on freedom and a world that needs to start loving each other before we the hate we hold to so tightly causes our world to self-destruct.