The Legacy Lives On Over five hundred years ago, Master Vampire Mikhal Arcos kidnapped a mystical Gypsy girl named Alliana. His intent was simple. He would use magic to make her bear him a son who would rule the world with him for eternity. He had every intention of discarding Alliana after his son was born, but things rarely go as planned. Their story unfolds in the Beneath the Shadows of Evil Trilogy. Now, five centuries later, their legacy lives on with the Connelly witches. They are a family whose ancestors were given a great gift of magic, but it came with one condition. They were entrusted to protect mankind from the demons who walk among them. The Connelly family lives through trials and tribulations as they battle the evil that would love nothing more than to torment and destroy men, but still they persevere in order to keep […] 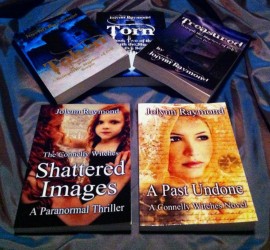 Shattered Images introduces you to the Connelly witches. They are the modern day descendants of Mikhal and Alliana Arcos from Beneath the Shadows of Evil. In Shattered Images, Jolynn Raymond introduces the Connelly Witches. They are a family whose magical talents date back hundreds of years. Those who bestowed the powers had only one command, protect mankind from the demons who would torment and destroy them. Rachel Connelly-Grey is a woman who has turned her back on her family’s magical heritage and responsibilities in order to be with the man she loves. She soon learns that forsaking her birthright and wishing for solitude from the family she must remain close to has horrible consequences, ones that she is no longer prepared to fight against. While her family searches for her, Rachel must fight a demon that is determined to wipe out her family one witch at a […]